Member of ‘notorious drug group,‘ 11 others nabbed in QC bust 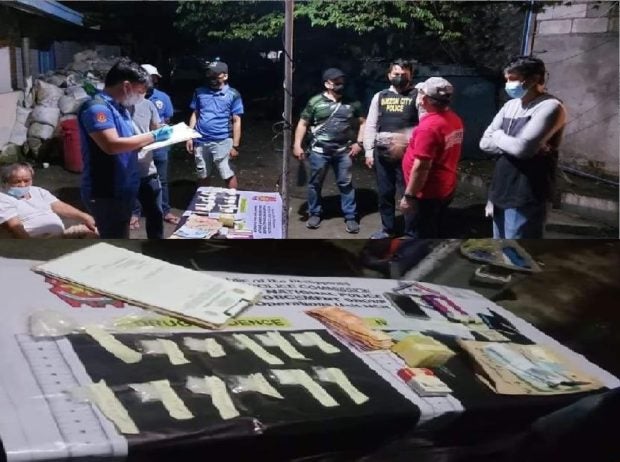 QCPD officers make an invetory of the crystal meth and other items seized in a buy-bust operation they conducted on Monday, Sept. 13, 2021, in Balintawak, Quezon City. (Photo from the Quezon City Police District)

MANILA, Philippines — A member of a “notorious drug group” and 11 other suspects were nabbed on Monday in a police buy-bust operation in Quezon City that yielded P680,00o worth of crystal meth, locally known as shabu.

QCPD anti-drug officers arrested the suspects after one of them, posing as a customer, bought P1,000 worth of shabu from one of them at around 12:30 a.m. on Monday on Dimaano Drive in Balintawak, Quezon City.

Some of the suspects were having a shabu session in the area, according to the QCPD.

After investigation, the QCPD was able to identify Dimaano and De Guia as high-value targets included in the Unified Drug Watchlist.

The Dimaano Drug Group is said to be behind in the proliferation of illegal drugs in Quezon City and other nearby areas.

Confiscated from the suspects were 100 grams of shabu valued at P680,000, the buy-bust money, and drug paraphernalia.

The suspects are under the custody of the Drug Enforcement Group of the Philippine National Police and will face charges for violating The Comprehensive Dangerous Drugs Act of 2002.