COVID clogs avenues for cure of blood disorder in PH 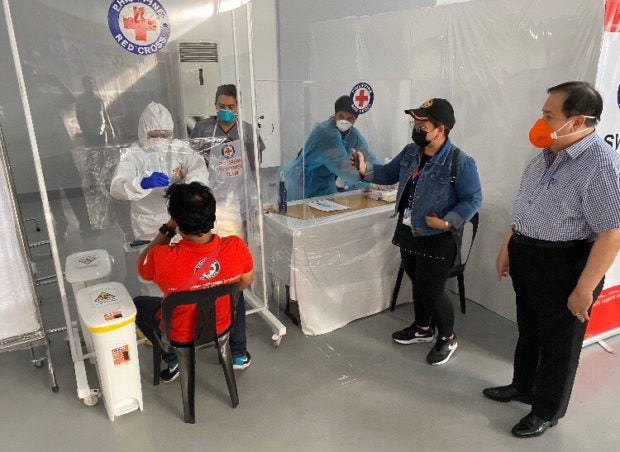 In this file photo, Senator Richard Gordon, also chairman of the Philippine Red Cross, leads an inspection by the humanitarian organization. (INQUIRER FILE)

MANILA, Philippines—In the Philippines, September does not only mark the start of the “ber months.” It is also known as Blood Diseases Month.

Blood diseases, according to the proclamation, are related to nutrition and environmental conditions and continue to increase in prevalence and pose serious health risks to Filipinos.

Amid the COVID-19 pandemic, persons with blood diseases bear a heavier burden. But patients with blood disorders deserve more recognition now than at any other time as they struggle to get proper medical attention.

According to the Philippine Council for Health Research and Development (PCHRD), one of the three sectoral councils of the Department of Science and Technology (DOST), there are three common blood diseases in the country.

The most common blood disorder among the general population.

Anemia is a condition wherein the body lacks or has low levels of healthy red blood cells or hemoglobin—a protein inside the red blood cells that carries oxygen throughout the body.

When a person has anemia, among the common symptoms they manifest include:

According to the American Society of Hematology, people who suffer from anemia may also experience pounding or “whooshing” in their ears and cold hands or feet.

“In treating anemia, the primary aim is to increase the number of healthy red blood cells in the body,” said PCHRD.

“Depending on the type of anemia, common treatment for anemic persons includes iron supplements intake, change of diet, blood transfusions, and chemotherapy or bone marrow transplant,” it added. 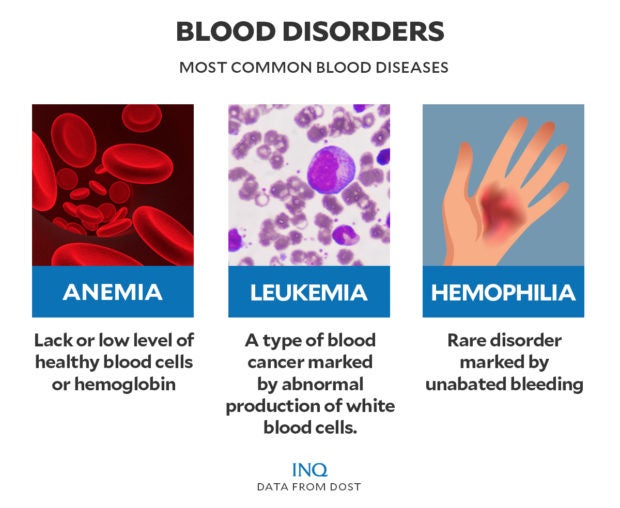 According to the United States Centers for Disease Control and Prevention (CDC), hemophilia is a bleeding disorder in which the blood can not clot properly. This can cause spontaneous and prolonged bleeding following an injury or surgery.

Hemophilia is a rare genetic disorder. However, CDC noted that it can also manifest itself later in life.

The CDC and National Hemophilia Foundation cited the following as the common signs and symptoms of the bleeding disorder:

There are two types of hemophilia. First is Hemophilia A or Classic Hemophilia, which according to the CDC is caused by lack of clotting factor eight.

On the other hand, Hemophilia B, or the Christmas Disease, is caused by lack of clotting factor nine.

There is currently no cure for hemophilia. However, there are several treatments available for patients.

Replacement therapy, considered the main treatment for severe hemophilia, replaces the missing blood clotting factor so that the blood can clot properly. Both CDC and Mayo Clinic said that this type of treatment is administered intravenously.

Other treatments include Desmopressin, a hormone that stimulates the body to release more clotting factors; clot-preserving medications; fibrin sealants; physical therapy; first aid for minor cuts; and vaccinations against other diseases such as hepatitis A and B.

Leukemia is a type of blood cancer, along with lymphoma and myeloma. This cancer is found in blood and bone marrow and it happens when there is an abnormal production of white blood cells.

“These abnormal white blood cells are not able to fight infection and impair the ability of the bone marrow to produce red blood cells and platelets,” the American Society of Hematology explained.

“The causes of leukemia are still unknown. However, there are some factors that [increase] the risk of developing cancer such as exposure to radiation and chemicals like benzene, cigarette smoking, hair dyes, family history of the same case, and genetic disorders such as down syndrome,” said PCHRD.

Depending on the type and stage of leukemia, the patient may experience any of the following symptoms:

Treatment depends on the type of leukemia and also on the person’s health treatment capability. Chemotherapy, radiation therapy, immune therapy, stem cell therapy, and surgery are some of the treatment options for this disease.

Based on data provided by the World Health Organization (WHO), the prevalence of anemia among children aged 6 months old to 5 years old in the Philippines has been decreasing during the past years.

The same goes for the prevalence of anemia among pregnant women aged 15 to 49 years old. 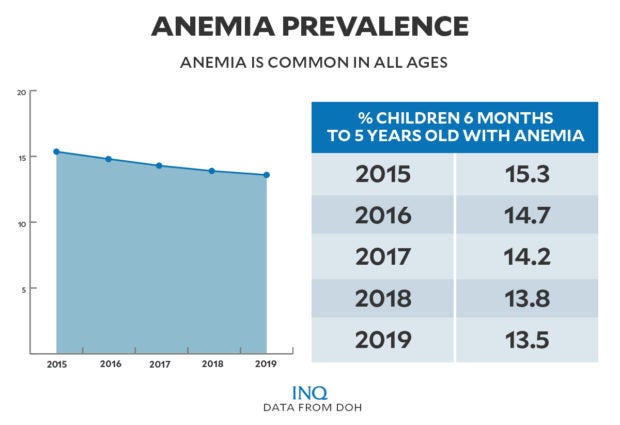 The prevalence rate of anemia in women of reproductive age in the country, between 15 to 49 years old, was around 12.3 percent in 2019.

The World Hemophilia Federation’s data showed that 1,566 Filipinos have hemophilia. At least 46 have Willebrand disease – the most common bleeding disorder caused by missing or defective von Willebrand factor (vWF).

However, it was earlier estimated that there could be some 10,000 Filipinos afflicted with hemophilia and around one million others with von Willebrand Disease and other clotting factor deficiency disorders.

READ: Many Filipinos with hemophilia can’t get treatment

Andrea Trinidad, president of Hemophilia Advocates-Philippines (HAP) attributed the low count of Filipinos diagnosed with hemophilia to the expensive laboratory examinations fees as well as the lack of diagnostics in the country.

“It’s expensive to undergo the factor assays for diagnostics. It’s costly that’s why only few are being diagnosed with hemophilia,” she said.

READ: EXPLAINER: Five things you need to know about hemophilia

For some patients diagnosed with blood disorders, medical care was already hard enough to access even before the pandemic.

The COVID-19 and the strict quarantine measures imposed by the government since 2020 have made it harder for patients to seek treatment.

Patients, like 14-year-old Althea Enriquez, who was diagnosed with beta-thalassemia—an inherited blood disorder that reduces the production of hemoglobin in the body—monthly treatments can cost over P50,000.

Her family also has to raise around P300,000 for her monthly maintenance medicine.

“It’s hard to make money last since we have plenty of loans. When the pandemic struck last year, my husband was out of work for a month,” said Althea’s mom, Jennifer.

READ: Teen with blood disorder wants to be a health worker

The lockdowns have also affected the way Trinidad and HAP reach out to people with hemophilia who are in need of medicine.

“The challenge this pandemic is when we transport medicine, especially during lockdowns and there are no couriers. It is okay here in Metro Manila since we can get it delivered via Grab. But we have recipients from the province who have died due to delivery issues,” Trinidad shared.

Aside from the additional financial burden caused by the pandemic, patients with blood disorders also experience difficulties in receiving monthly blood transfusions.

According to Jennifer, they started to have a hard time finding donors for their daughter during the pandemic since “people are scared of hospitals.”

Marivic Manalang—mother of Aila who also suffers from Beta-thalassemia—shared the struggle in finding donors for her daughter’s blood transfusions.

“While she normally needs three bags of blood a month, the number has gone down to one bag a month because of the lack of donors,” she said.

READ: Teen with blood disorder wants to be a teacher

In 2020, Philippine Red Cross (PRC) chair Sen. Richard Gordon appealed to the public to donate blood amid the COVID-19 pandemic.

This was after donors have stopped going out to give blood out for fear of contracting the virus.

In July 2020, the Department of Health (DOH) said the country’s supply of blood is nearing critical level, as more people hesitate to donate.

“We are very challenged,” said Health Undersecretary Maria Rosario Vergeire in an interview with ABS-CBN’s Teleradyo

“We still have supply. What we were saying is we are nearing the critical level but there is still supply of blood at the Philippine Blood Center and other blood centers in the country. We just do not want to reach the level where we will have no supply,” she added.

According to Marites Estrella, program manager of the DOH National Voluntary Blood Services Program, the country had 1.04 million blood donation units in 2020. 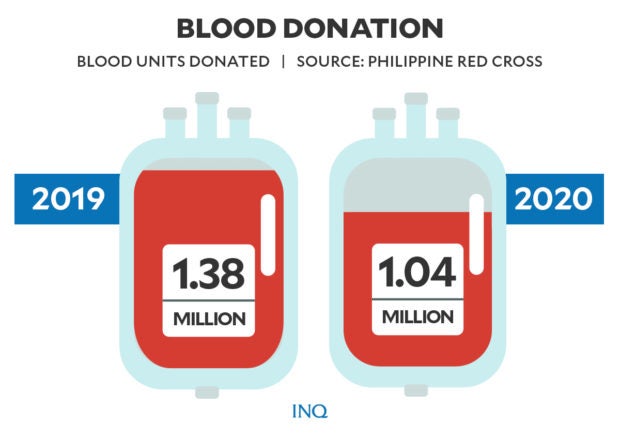 In a separate statement, she explained that the blood donations declined by 22 percent last year due to the imposition of lockdowns.

To encourage more people to donate, the DOH said in June this year that donors are no longer required to have an RT-PCR COVID-19 test before they give blood.

PRC on Sept. 4 invited people who had already been vaccinated to donate blood.

“The demand for blood never stopped,” Gordon said in a statement.