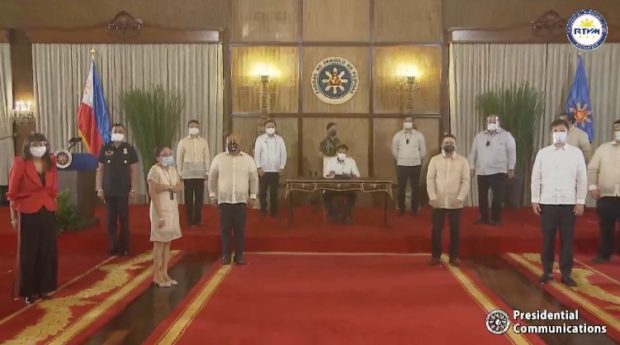 MANILA, Philippines—President Rodrigo Duterte on Friday signed into law the measure modernizing the Bureau of Fire Protection (BFP) which would allow some 2,000 firefighters to carry guns.

The President signed the measure and even justified the reason behind arming firefighters in a ceremony in Malacañang attended by some members of Congress.

“Bakit mo bigyan ng baril ang mga bumbero e sunog lang ang kalaban nyan? You know, the organization itself and the individual bumbero, they are exposed to so many dangers,” Duterte said in his speech.

(Why would you give a gun to a firefighter when they are only putting out fire? You know, the organization and the firefighters themselves are exposed to so many dangers.)

“There are so many challenges in the work of a bumbero, in the day of his life na kailangan protektahan. So with providing yung baril, yung bigyan lang sila kaunting unit, it would really be just to ward off threats and destruction of government properties,” he added.

(There are so many challenges in the work of a firefighter, in the day of his life which needs protection. By providing them with a gun, or even giving them a few units,  it would really be just to ward off threats and destruction of government properties.)

While the bill was being taken up in Congress, some senators resisted the provision authorizing firefighters to carry guns but they were eventually outvoted.

Fourteen firefighters for every fire regional office and city station will be authorized to carry a firearm as members of the security and protection unit.

Senator Ronald “Bato” Dela Rosa, who sponsored the measure, said there are 17 fire regional offices and 146 city fire stations, which means only 2,282 firefighters or 7.9 percent of the 32,800-strong BFP will be armed.

Dela Rosa also estimated about P80 million would be needed to purchase the firearm units.

Under the law, BFP’s functions will also be expanded to include responding to natural and man-made disasters.

The BFP is also to assist in rescue and emergency medical services by coordinating and cooperating with the National Disaster Risk Reduction and Management Council and local government units.