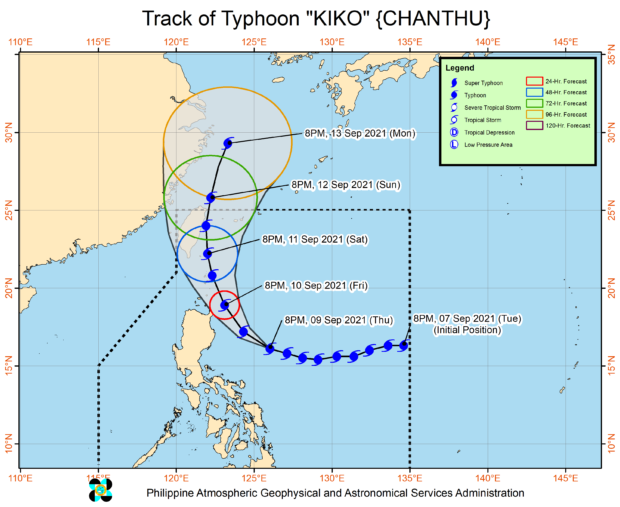 MANILA, Philippines — Typhoon Kiko maintained its strength as it continues to move west-northwest over the Philippine Sea east of Aurora, while Tropical Storm Jolina has left the Phillippine area of responsibility (PAR) on Friday, the state weather bureau said.

The Philippine Atmospheric, Geophysical and Astronomical Services Administration (Pagasa), in its 11:00 p.m. update, reported that Kiko was last spotted 435 kilometers (km) east of Baler, Aurora or 370 km east of Casiguran, Aurora packing maximum sustained winds of 195 kilometers per hour (kph) near the center and gusts of up to 240 kph.

It is heading west-northwest at 20 kph.

Pagasa also noted that the typhoon’s wind extends up to 200 km from its center or its eye.

Heavy to intense and at times torrential rains due to the typhoon may be experienced in Cagayan including Babuyan Islands, Batanes, and northern Isabela starting on Friday until Saturday evening. 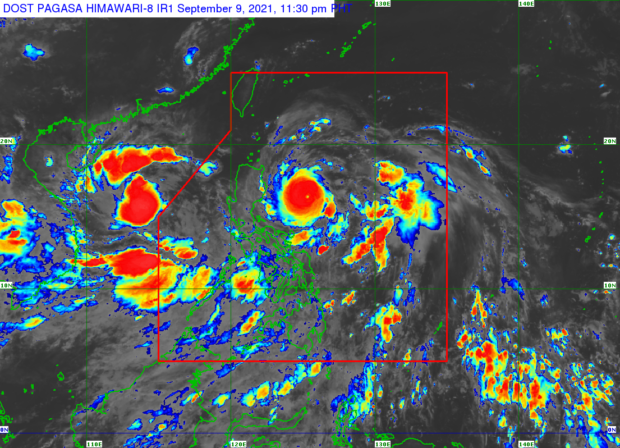 Meanwhile, moderate to heavy with and times intense rains may be experienced in the rest of Isabela, the northern portion of Aurora, Ilocos Norte, and Apayao.

Tropical Cyclone Wind Signal (TCWS) No. 2 (damaging gale-force to storm-force winds that may prevail within 24 hours) is currently raised in the following areas:

TCWS No. 1 (strong winds expected within 36 hours)  is raised over these areas:

Meanwhile, Jolina has strengthened to a severe tropical storm as it heads towards Vietnam.