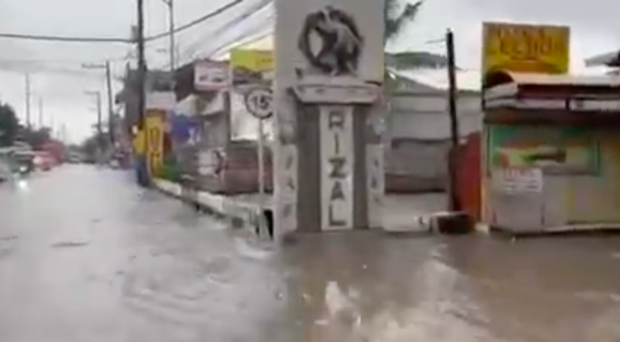 Massive floods caused by Severe Tropical Storm Jolina have caused a river to swell in the boundary of Muntinlupa-San Pedro, Laguna as of 2:10pm, Sep. 8, 2021.
Screengrab from the Facebook video of Muntinlupa City DDRM/PIO

MANILA, Philippines — Tropical Storm Jolina has damaged a total of P299.4 million in the agriculture sector, the Department of Agriculture (DA) reported on Thursday.

It destroyed 57,659 hectares of agricultural areas, with an estimated production loss of 16,155 metric tons.

The biggest losses were reported in the rice sector, comprising 83.5 percent of the total damage. The rest were sustained by rice farmers, high-value crop planters, fishers and livestock raisers.

According to the DA, however, through its Regional Field Offices, it is still conducting further assessment and validation of damage and losses brought by the storm in the agri-fisheries sector.

It also added that it has already released a quick response fund for the rehabilitation of the affected areas as well as funds for affected farmers.

Jolina is currently on track to exit the Philippine Area of Responsibility by Thursday night, the state weather bureau earlier said.

Typhoon Kiko intensifies as it moves over Philippine Sea

2 fishermen die, another missing from sunken boat off Marinduque