Hontiveros worries Parlade at NSC ‘will only cause nat’l insecurity, instability’ 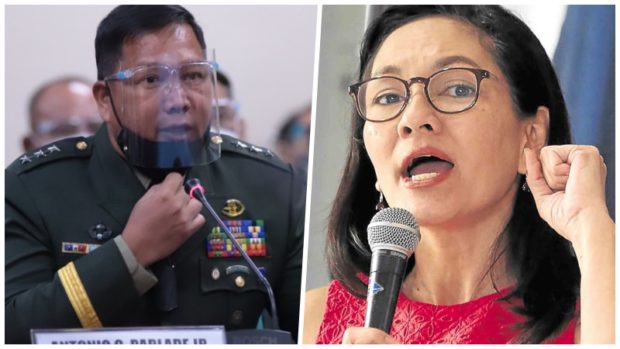 MANILA, Philippines — The appointment of Antonio Parlade Jr. as Deputy Director-General of the National Security Council (NSC) may only bring about “national insecurity and instability,” according to Senator Risa Hontiveros on Thursday.

Hontiveros said it is hard to understand why President Rodrigo Duterte is committed to recycling “disgraced” officials to new government posts and “rewarding bad behavior among public employees.”

“I worry that General Parlade’s appointment to the NSC will only cause national insecurity and instability, given his previous actions,” she said.

“We have many officers qualified to serve as Deputy Director-General of the NSC who are not spreading fake news and red-tagging everything from community pantries to celebrities. Bakit ito pang si General Parlade ang napili (Why him)?” she also asked.

Meanwhile, Senator Panfilo “Ping” Lacson reiterated that Duterte has the power to appoint Parlade to the said position.

“Lt. Gen. Parlade is not disqualified to hold the position. Those opposing his appointment have the right to express their opinion as long as their comments will not violate existing laws,” he said.

Parlade was the commander of the Armed Forces of the Philippines-Southern Luzon Command while also serving as a mouthpiece of the National Task Force to End Local Communist Armed Conflict (NTF-Elcac). In July, he resigned from his NTF-Elcac post and retired from military service.

The controversial Parlade drew heavy criticisms for red-tagging and alleged profiling of different organizations, lawyers, journalists, and even celebrities.

Parlade also lambasted the Senate, even calling senators “stupid” for wanting to defund the NTF-Elcac.

For this, 15 senators pushed to reprimand him.

The NSC is a government agency under the Office of the President that coordinates and integrates national security policies.

This body, led by the president, includes leaders of Congress, members of the Cabinet, and even former presidents.