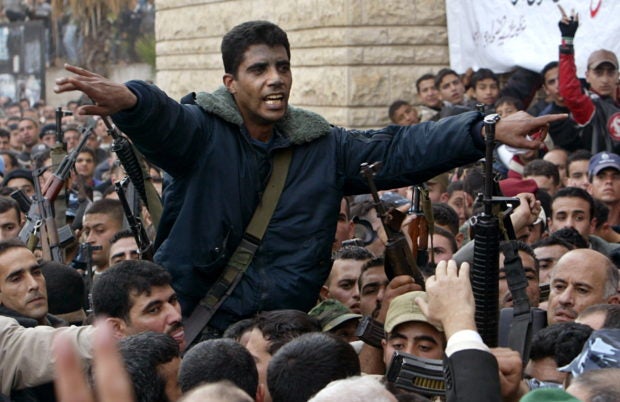 FILE PHOTO: Palestinian commander of the militant Al Aqsa Martyrs Brigades Zakaria Zubeid is carried on the shoulders of supporters in Jenin, in the Israeli-occupied West Bank December 30, 2004. REUTERS/Ammar Awad

RAMALLAH, Palestinian Territories — Israel flooded the occupied West Bank with reinforcements on Wednesday in the manhunt for six Palestinians who have been on the run for three days after escaping from a top security prison.

The army said in a statement that in order to try to find the men “it has been decided to extend the general closure of Judea and Samaria”, Israel’s terminology for the West Bank.

It said the closure will last until midnight on Friday “subject to a situational assessment”.

Army chief Aviv Kohavi had decided to “reinforce IDF troops… with combat battalions, observation troops and a number of IDF aircrafts that are observing the area to assist in capturing the security prisoners and thwart terrorist attacks in the region”, the statement said.

Demonstrations were held in several West Bank towns late Wednesday in support of the fugitives.

AFP journalists reported that demonstrations in support of the six fugitives, five of whom are members of the Islamic Jihad, and one from Fatah, the secular movement of president Mahmud Abbas, also took place in Ramallah and in east Jerusalem.

Earlier, the Palestinian Prisoners’ Club said Israeli forces had arrested at least six relatives of the Palestinians who broke out of Gilboa prison in northern Israel, amid protests in support of the escapees.

The six staged their jailbreak on Monday through a hole they had dug under a sink in a prison cell, reportedly using a spoon.

Israel has deployed drones, road checkpoints and an army mission to Jenin, the flashpoint West Bank home town of many of the men locked up for their roles in attacks on the Jewish state.

The Palestinian Prisoners’ Club said two brothers of Mahmud Ardah, described in local media as the mastermind behind the breakout, have been arrested.

Amani Sarahneh, a spokeswoman for the prisoners’ group, told AFP that others could also have been arrested, and that some had been only briefly detained.

The Israeli army — which has occupied the West Bank since 1967 — confirmed that “several arrests were made overnight”, without elaborating.

“Holding someone in order to coerce a relative to do something is a mafia-style tactic,” tweeted Omar Shakir, Israel and Palestine director for Human Rights Watch.

An Israeli injunction is in effect against publishing details of the jailbreak investigation, even as local media report on the scramble to recover from the embarrassing lapse and prevent any possible attack by the fugitives.

Those on the run include Zakaria Zubeidi, a former militant leader from Jenin.

Gilboa prison — which opened in 2004 during the second Palestinian intifada, or uprising — is a high security site where hundreds of Palestinians are detained among other inmates.

The prison service said all those held at Gilboa over “security offenses” were being relocated in case more tunnels have been dug.

The prisoners’ group reported “tensions” in jails on Wednesday, and a spokeswoman for the Israeli prison authorities told AFP fires had been lit in Ktziot and Ramon jails.

“The situation is now under control, the fires have been extinguished,” she said.

When news of the escape first broke on Monday, many people in the Gaza Strip and in Jenin took to the streets to celebrate.