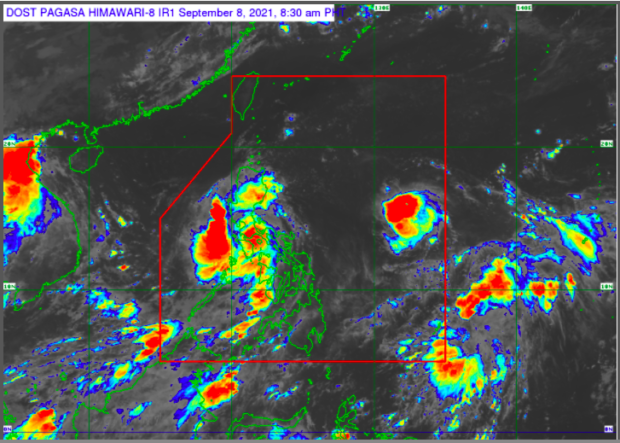 Pagasa weather satellite image as of 8:30 AM.

MANILA, Philippines — A storm surge is expected in coastal areas of Oriental Mindoro, Batangas, and Quezon in the next 24 hours due to severe tropical storm Jolina, the state weather bureau said on Wednesday.

“In the next 24 hours, storm surge of up to 1.0 m (meters) over several coastal areas of Oriental Mindoro, Batangas and Quezon may result in coastal inundation which may pose threat to life and property,” Pagasa said in its 8 am bulletin.

Oriental Mindoro, Batangas and Quezon are under Tropical Cyclone Wind Signal (TCWS) No. 2, according to Pagasa.

The state weather bureau also said that coastal areas of localities under TCWS, especially those at No. 2 may also experience coastal flooding due to hazardous surf conditions.

These are the areas under the TCWS No. 2, where damaging gale-force to storm-force winds are expected in the next 24 hours.

TCWS No. 1 is raised over the following areas, where strong winds are expected within 36 hours:

TCWS No. 1 in other areas is hereby lifted, according to Pagasa.

Jolina, with a maximum sustained winds of 95 kilometers per hour (kph) near the center and gustiness of up to 115 kph, will make a landfall in either San Juan or Lobo in Batangas within 1-2 hours, according to Pagasa.

Afterwards, Jolina will cross the Batangas-Cavite area before emerging over the mouth of Manila Bay by Wednesday afternoon or evening, that will be followed by another landfall in the vicinity of Bataan Peninsula.

Frictional effects during its traverse of mainland Luzon will weaken Jolina down to tropical storm category.

Jolina is expected to exit the Philippine Area of Responsibility on Friday morning.