After large drug haul in Zambales, 80 more kilos of ‘shabu’ intercepted in Bataan 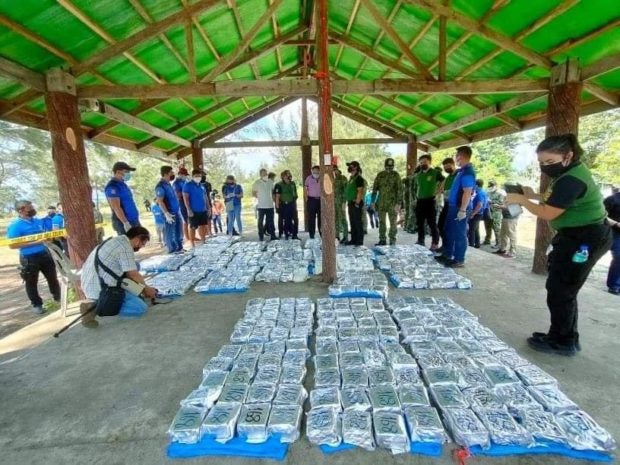 A team from the Philippine National Police and Philippine Drug Enforcement Agency confiscated these packs of alleged “shabu” (crystal meth) worth P3.4 billion from a beach resort in Candelaria town, Zambales province on Tuesday, Sept. 7, during an anti-narcotics operation. Hours later, another large haul of shabu was intercepted at a checkpoint in Hermosa town, Bataan province. (Photo courtesy of Zambales Police Provincial Office)

SUBIC BAY FREEPORT–Another large haul of illegal drugs was seized on Tuesday (Sept. 7) at a checkpoint in Hermosa town, Bataan province near this freeport, hours after the fatal buy-bust operation in Candelaria town, Zambales province.

Three Chinese drug suspects were also arrested, Eleazar said, adding that the suspects came from the shabu warehouse in Candelaria.

Earlier, four Chinese drug suspects were killed during an alleged shootout with authorities in the Candelaria shabu warehouse.

Initial reports from the local police and the Philippine Drug Enforcement Agency showed that at least 500 kilos of shabu worth P3.4 billion were also recovered during the anti-narcotics operation inside a rest house.

The suspects belonged to a big-time syndicate that distributes illegal drugs in Luzon, including the National Capital Region, Central Luzon and Southern Luzon, Cardiño told the Inquirer. INQ