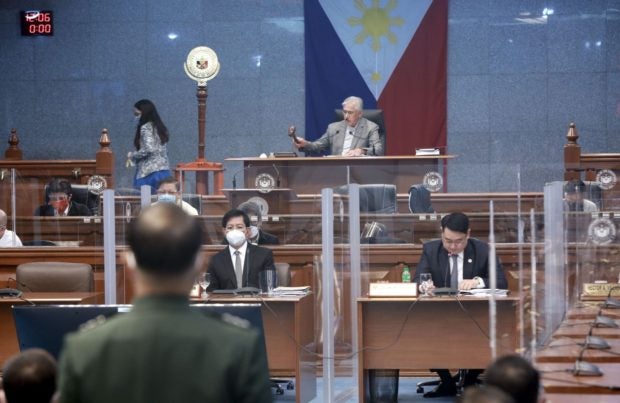 Senate President Vicente Sotto III bangs the gavel as he presides over the hybrid plenary session at the Senate in this phot taken on Sept. 1, 2021. Senate PRIB file photo / Alex Nueva España

MANILA, Philippines — Several senators on Friday pushed back against President Rodrigo Duterte’s call for the Senate not to probe ongoing government programs, with one lawmaker stressing the need for “better,” not “weaker,” mechanisms for accountability amid the pandemic.

“The Senate is simply doing its job. The [government] offices have nothing to worry about if they are doing nothing wrong!” Senate President Vicente Sotto III said in a message to reporters.

“The Senate is investigating issues of the past not ongoing,” he added.

“I will not allow skirmishes to derail important pieces of legislation, [e]specially the GAA [General Appropriations Act],” the Senate leader said in a separate message.

In a taped public address aired late Thursday, Duterte told senators not to investigate ongoing programs of government agencies as it “muddles up” and causes delays in its progress.

“You’re trying to muddle up everything by questioning every time how or why you spend the money,” the President had said.

Duterte issued the call amid the Senate blue ribbon committee’s investigation into the utilization of pandemic funds.

Congress is also in the early stages of deliberations on the proposed P5.024-trillion 2022 national budget.

“The Senate is composed of 24 republics. We ourselves cannot impose on each other. While we always respect the decision of the majority, we also make sure that we follow our individual convictions and beliefs, based on conscience,” Senator Panfilo Lacson said in a statement.

“I cannot see how anybody, even if he is the President of our country, can influence us especially on an issue involving public funds — and most especially in the middle of a pandemic. At least that is as far as I [can] see it in my almost 18 years as a senator of the Republic,” he added.

Senator Risa Hontiveros, meanwhile, said the country’s “state of emergency” due to the pandemic should not be made a reason to have a less stringent process that would ensure the proper handling of public funds.

(Rather, because of the pandemic and many emergency purchases, we need more and better, not less and weaker mechanisms for accountability.)

Similar to what Sotto said, Hontiveros pointed out that a government agency should not be worried if their spending and transactions are above board.

(Agencies which remain loyal to their duties have nothing to worry about, especially because the COA is giving them the opportunity to correct what needs to be corrected. There’s nothing to be afraid of if their transactions are above board.)

“Speed should not do away with built-in protection mechanisms. Hindi ‘yan [That is not] mutually exclusive,” Hontiveros added.