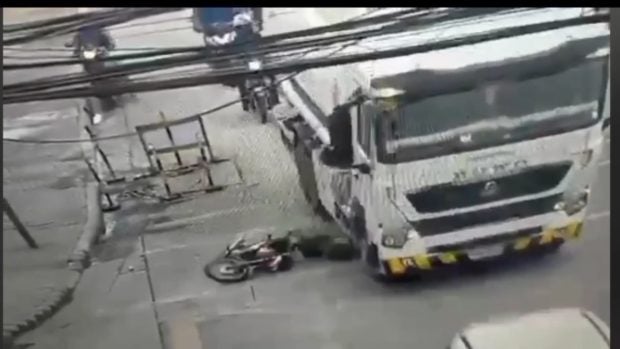 Former mayor and Catholic faith defender Socrates Fernandez of Talisay City, Cebu, escaped death after his motorcycle hit the side of a tanker truck along the South Coastal Road. (Screengrab from CTTODA)

Fernandez, an incumbent city councilor, was riding his motorcycle on the way to attending Mass around 5 p.m. on Sept. 2, when he accidentally hit the side of a tanker truck along the South Coastal Road in Talisay City.

When the rear tires of the truck hit him, his motorcycle swerved as Fernandez dropped on the road.

The truck was not able to stop immediately and almost run over Fernandez’s head, who was still lying on the road.

“The tires actually touched the back of his neck and the back of his head, but he quickly stood up and escaped (death),” said Jonathan Tumulak, chief of the City of Talisay Traffic Operations and Development Authority (CTTODA).

The closed-circuit television recorded the entire incident, the footage of which was posted by the CTTODA on social media.

Tumulak said Fernandez was unharmed and only suffered minor bruises.

After the incident, Fernandez boarded his motorcycle and attended Mass at the St. Joseph’s Parish in Tabunok, Talisay City.

Tumulak said they offered to bring him to the hospital, but Fernandez declined, saying he was all right.

Fernandez had the incident recorded in the police blotter but did not file any charges against the truck driver.

In his radio program on Friday morning, Fernandez, a prominent defender of the Catholic faith and other charismatic groups, believed that what happened to him was a “miracle.”

Fe Barino, head of the Cebu Archdiocese’s Commission on the Laity, said she could not figure out how Fernandez survived the accident.

Barino on Friday talked to Fernandez, who shared his near-death experience.

“According to him, immediately after his fall, it seemed that he’s like a ball that simply bounced on the road to escape the rear tires of the truck,” Barino said.

The video of the accident went viral on social media, with many netizens praising God for saving Fernandez.