Don’t war with China; trade with it, increase investments-Senator Recto 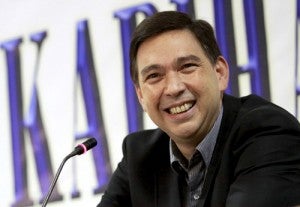 Senator Ralph Recto : “If the country would be able to close its $900-million trade deficit with China, it would be scoring a “big economic victory", more meaningful than trying to sink one of their vessels.” (photo: senate.gov.ph)

Thus spoke Senator Ralph Recto as he described an administration ally’s call to boycott all China-made products, saying the Philippines should instead increase its trade relations with China.

“The country’s trade with China is bigger than the United States (US),” he said. “ Boycotting everything ‘Made In China’ is foolish and ill-advised,” Recto said in a statement on Tuesday.

He advised that the conflict between the Philippines and China over the contested Spratly islands question should be settled peacefully.

“You can’t be saber rattling with China. It’s our biggest trading neighbor,” he said, adding that the right response was to increase the country’s trade and investments with China..

If the country would be able to close its $900-million trade deficit with China, Recto said, it would be scoring a “big economic victory”, more meaningful than trying to sink one of their vessels.

The Philippines imported $7 billion worth of goods from China in 2010, while shipping a little over $6 billion goods to China.

Recto also noted that as part of the emerging economies, and touted by respected global bodies to be in the Top 25 countries with strong economies by 2025, the Philippines should “act accordingly” and should not be “boycott happy.”

“We should not only engage China diplomatically, but also through business,” he stressed.

The senator acknowledged that the Philippines should start modernizing its armed services, not to engage China or other claimants of the Spratlys, but to protect its fishermen, ships and cargoes and territorial waters.

“You still need to build the AFP (Armed Forces of the Philippines), not to gear up for an arms race, but to protect our coral reefs and fishermen,” Recto said. “You need to do it. You have to start somewhere.”

“We should start buying some of these equipment, and I don’t care if we buy them from China,” said the senator.

Recto said protecting the country’s territorial sovereignty gains importance more than ever, now that the disputed Reed Bank in Western Palawan has been renamed as “Recto Bank”, in honor of his grandfather, nationalist Claro M. Recto.