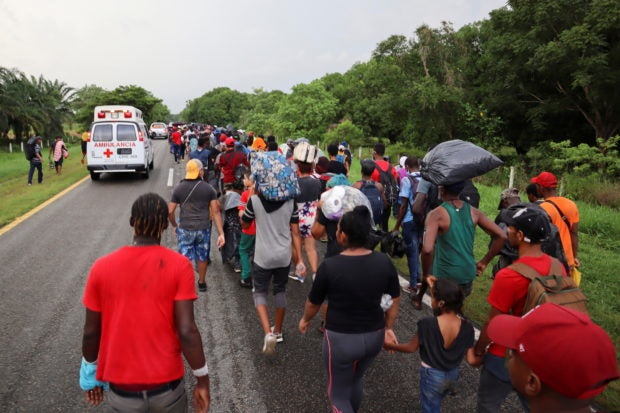 Migrants and asylum seekers from Central America and the Caribbean walk in a caravan headed to the Mexican capital to apply for asylum and refugee status, on a highway near Escuintla, in Chiapas state, Mexico August 29, 2021. REUTERS

MEXICO CITY — Mexico’s National Migration Institute (INM) condemned the actions of agents caught on video over the weekend throwing a migrant to the ground and kicking him in the face with the help of National Guard troops.

The government deployed hundreds of security forces to head off a caravan of migrants and asylum seekers who left the southern city of Tapachula on Saturday for Mexico City, where they hoped to seek expedited asylum proceedings.

Videos posted to social media showed confrontations along a highway in the state of Chiapas between members of Mexico’s militarized National Guard and the migrants, many of whom were accompanied by young children or carrying babies.

One of the videos shows an INM agent, with the help of National Guards wearing riot gear, grabbing one of the migrants and knocking him to the ground, as another agent kicks him in the face.

In a statement, INM announced the two agents had been “suspended” due to what it described as their inappropriate conduct on Saturday.

“No conduct outside human rights protocols and policies will be tolerated,” the statement said, adding that additional punishment will be determined by an internal inspector.

Another video showed members of the National Guard using their shields to beat a migrant carrying a minor.

Neither the INM or National Guard made any mention of the videos. It was unclear who had recorded the videos.

Amnesty International’s Mexico office called on Twitter for Mexico “to act with a humanitarian approach in the face of the arrival of Central American and Haitian migrants fleeing the violence and crisis generated by natural disasters.”

The National Guard, responding to Amnesty International, said on Twitter: “We have increased supervisory controls to improve procedures and prevent abuses.”

Read Next
Duterte defends appointment of Davao people in gov’t
EDITORS' PICK
Legarda emphasizes role of ICC/IPs in nation building this IP month
NCR’s COVID-9 alert level may be downgraded from 3 to 2 soon — DOH
Work-From-Home is here to stay and requires reliable logistics
Climate Change Commission and Nestlé PH to discover sustainability-focused solutions
FDA reviewing COVID-19 vaccines’ EUA for booster shots
Biden vows to stand with Asia on freedom, hits at China on Taiwan
MOST READ
Drivers now required to take driver’s education upon license renewal – LTO
Gordon to Duterte: You? Teaching me courtesy?
Marcos Jr’s ‘special diploma’ from Oxford: You can have it, too
Can Marcos Jr. be disqualified?
Don't miss out on the latest news and information.