By rail, road or on foot, migrants flow across Mexico towards US | Inquirer News
Close
menu
search

By rail, road or on foot, migrants flow across Mexico towards US 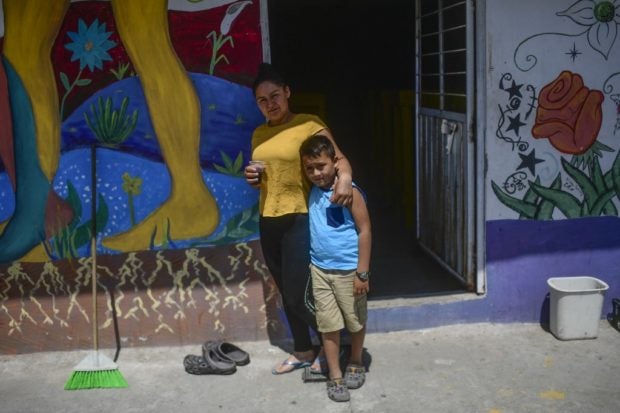 Hondurans Greyssi Venegas, 23 and her son Eduardo Hernandez, 7, are seen at the Sagrada Familia shelter as they wait for the so-called La Bestia (The Beast) cargo train, to attempt reaching the US border, in Apizaco, Tlaxcala state, Mexico on April 9, 2021. Photo by Pedro PARDO / AFP

APIZACO, Mexico — Greyssi Venegas devours her first meal in three days at a Mexican shelter near the railroad where migrants risk their lives clinging to freight trains on their grueling journey north to the United States.

An unexpected pregnancy has complicated her already tortuous trip from Honduras by rail, road and on foot with her seven-year-old son Eduardo.

“Yesterday I felt ill. I didn’t want to eat. So I asked for a pregnancy test,” said the 23-year-old, who has a cough and dark circles around her eyes from fatigue.

Venegas scraped together around $100 for her second attempt to reach the United States in three years, but the money had already run out by the time she reached Mexico.

She set off from the Honduran city of San Pedro Sula on March 21 and walked almost 300 kilometers to eastern Guatemala with her son, before traveling more than 12 hours by road.

Then she crossed part of southern Mexico on foot before riding a freight train northwards with other undocumented Central American migrants fleeing violence and poverty.

“I worked on a coffee farm, but the hurricanes left me with no job or home,” Venegas told AFP at the Sagrada Familia shelter in the central Mexican state of Tlaxcala.

At the shelter Venegas joined other migrants spending one or two nights to regain their strength before resuming their arduous journey north.

The US-based owner of the Honduran coffee plantation has promised to help her if she gets asylum in the United States.

But he cannot do it before because he could be accused of human trafficking, she said.

“How I cross over is my problem,” Venegas said.

The shelter is overflowing with migrants, so some have to spend the night next to the tracks of the nearby railroad known as “The Beast” ridden clandestinely by migrants through Mexico.

In three months, the Sagrada Familia hostel has helped around 3,000 people — a “dramatic” figure compared with 6,500 in the whole of 2020, said its director, Sergio Luna.

“We don’t see it decreasing,” he said.

In March, around 172,000 undocumented migrants — many from Central America — were detained crossing the US border with Mexico, a 71 percent increase in just one month and the highest level in 15 years, the US Customs and Border Protection (CBP) reported.

It said that 60 percent of them were deported to Mexico under pandemic-control measures.

Under pressure from Washington, Mexico has stepped up security along its southern border with Guatemala to stem the flow of Central Americans, but migrants are finding new routes across.

Hernan Cardona, a 58-year-old former Honduran police officer, fought back tears as he recounted how the “ordeal” began on March 15 for his five children and a granddaughter.

Guatemalan police took around $375 from him on the way north, forcing him to look for work making deliveries in southern Mexico to earn some money.

“Then we went on foot for eight days and eight nights… sleeping in the mountains and without eating,” he said.

Migrants say they have been given new hope by US President Joe Biden’s reversal of the hardline immigration policies of his predecessor Donald Trump.

The changes include allowing unaccompanied children to stay and be united with relatives living inside the United States.

The number of unaccompanied children detained after crossing the border illegally, or trying to sneak through official entry ports, doubled in March from February to 18,890, according to the CBP.

But Venegas said she had no intention of sending her son, who has a heart condition, across the frontier on his own.

“I wouldn’t allow them to separate us for anything in the world. Only God will be able to do it,” she said.