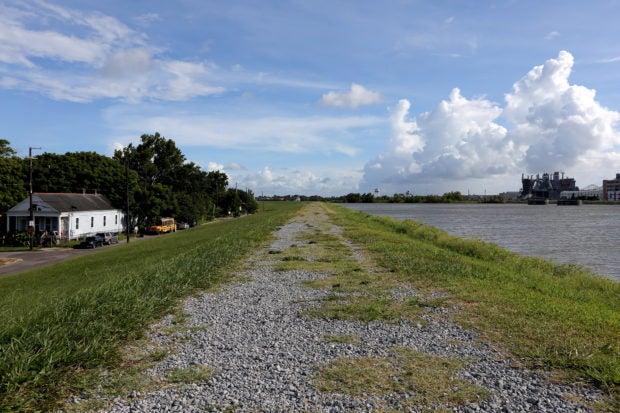 FILE PHOTO: A view from the top of the levee that protects the Ninth Ward from the Industrial Canal is pictured as Tropical Storm Barry approaches land in New Orleans, Louisiana, U.S. July 11, 2019. REUTERS/Jonathan Bachman

A $14.5 billion system of levees, flood gates and pumps has largely worked as designed during Hurricane Ida, sparing New Orleans from the catastrophic flooding that devastated the area 16 years ago in the wake of Katrina, officials said.

But the core area inundated during Hurricane Katrina in 2005, when levees failed and 80% of the city was under water, appeared to have avoided widespread flooding, suggesting the upgraded network of levees, gates and pumps worked.

The Southeast Louisiana Flood Protection Authority East, the state agency that manages the Hurricane and Storm Damage Risk Reduction System (HSDRRS), said that no levees had been breached and no problems reported with its water-pumping machines.

“For the most part, all of our levees performed extremely well, especially the federal levees,” said Louisiana Governor John Bel Edwards, taking stock one day after Ida made landfall in Port Fourchon, some 60 miles (100 km) south of New Orleans.

“But at the end of the day, the storm surge, the rain, the wind, all had devastating impacts across southeast Louisiana.”

To be sure, officials were still assessing the toll of a storm that knocked out power across Louisiana, ripped roofs off homes and businesses and killed at least one person. Ida, which was grinding over southwestern Mississippi on Monday, had lost some punch but remains a powerful storm.

Residents in parts of Plaquemines Parish were urged to evacuate late Sunday following a levee failure in Alliance, about 20 miles (30 km) south of New Orleans, according to a notice on Facebook from the parish government, while rains and storm surge over-topped a levee in the town of Jean Lafitte, also south of the city.

The failure of some protective systems reflected a gap in investment between the federally funded project ringing New Orleans and smaller communities outside it, said Torbjorn Tornqvist, a coastal geoscientist and professor at Tulane University.

Tornqvist said the system protecting New Orleans, which was built by the U.S. Army Corps of Engineers and ranks as one of the largest public works project in the world, appeared to have held up well to Ida, the system’s biggest test to date.

But Tornqvist said Ida was less damaging than it could have been for the New Orleans area because it hit land a good distance west of the city and because the Mississippi River was not at elevated levels prior to the storm.

A strong hurricane that landed just west of the mouth of the Mississippi when the river was already high could put the city under water again, he said.

“It’s way better than it was during Katrina, but that doesn’t mean it can handle everything,” Tornqvist said.