After Taliban takeover, Afghans in the Gulf worry about home 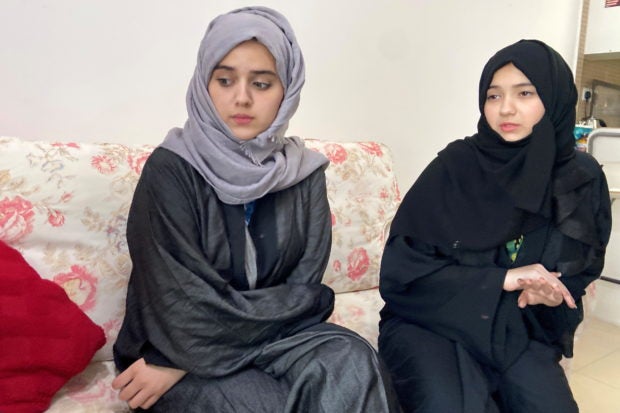 Daughters of Abadat, 35, a woman from Afghanistan, look on at their home in Ajman, United Arab Emirates, August 29, 2021. REUTERS/Abdel Hadi Ramahi

AJMAN, United Arab Emirates — Five months ago, 35-year-old Abadat left Afghanistan with her two teenage daughters for the Gulf fearing for their safety after a series of explosions rocked the neighborhood where they lived.

Now safely in the United Arab Emirates, Abadat fears for her family back in Afghanistan following the swift take over by the Taliban that culminated in the capture of Kabul on Aug. 15.

“I’m really scared for them and I wish I can help them and bring them to me or to any other country that is safe,” she said of her mother and three sisters, all Kabul residents.

The UAE, who sent troops to Afghanistan during the 20-year war including to train Afghan forces, says it has facilitated the evacuation of at least 36,500 people from Afghanistan and that as of this week it was temporarily housing around 8,500 Afghans.

Abadat now lives in Ajman in the north of the UAE and is getting support from the local groups helping people in need.

Abadat said she worries that Afghan women’s lives will become increasingly difficult under the Taliban, an ultra-hardline Sunni Islamist group that largely barred women from working or studying during their 1996-2001 rule.

“Women’s rights are lost … Our life is difficult in Afghanistan with the Taliban in charge, it’s very hard,” said Abadat, who declined to disclose her surname for security reasons.

Since capturing Kabul on August 15, the Taliban have shown a more moderate face and said they will respect women’s rights this time around, but these statements have done little to reassure Abadat.

“I am frightened and tense. It’s not safe to live in that country,” she said, adding that the country was not safe even before the Taliban took over.

In neighboring Saudi Arabia, Afghan Khalid Abdulrasheed told Reuters he prays for peace in his country and that all those who recently fled will be able to return safely.

Others hope that a looming economic crisis caused by the Taliban takeover can be staved off.

“We want a government to be formed. The Taliban are also our brothers… We want to have a government so that in the future everything gets back to normal,” Afghan Sheren Agha said in Riyadh.