Over P20M worth of marijuana plants, dried leaves, destroyed in Kalinga — PDEA 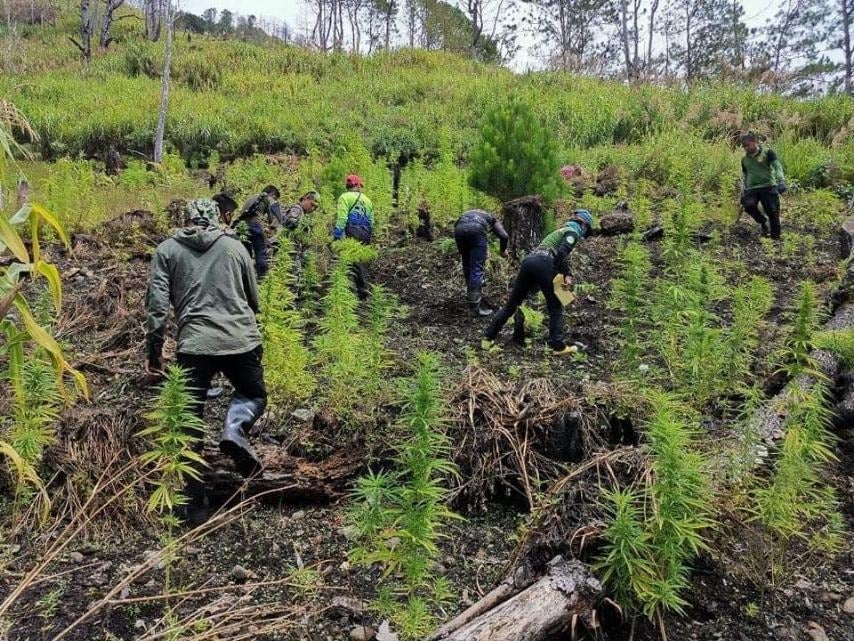 PDEA agents uproot marijuana plants for burning from a plantation in Kalinga. (Photo from PDEA).

MANILA, Philippines — A two-day operation by the Philippine Drug Enforcement Agency (PDEA) in Kalinga led to the destruction of full-grown marijuana plants and dried leaves worth over P20 million.

Reports from the PDEA said the operation at Loccong town from Wednesday to Thursday covered eight marijuana plantation sites with an estimated land area of 8,100 square meters. The operation was conducted by various PDEA offices and anti-drug operatives of the local police.

From these areas, 87,950 full-grown marijuana plants said to be worth P17.59 million were destroyed, while 22 kilograms of dried leaves and stalks with fruiting tops — worth P2.640 million — were also burned.

In total, the PDEA placed the value of the destroyed marijuana plants and dried leaves at P20.23 million.

The latest PDEA operation appears to be the third time in less than two months where anti-drug operatives seized and burned marijuana plants. On August 6, the Kalinga police destroyed P95.4 million worth of full-grown marijuana plants.

Then on July 21, P21.5 million worth of marijuana plants were also uprooted and burned from three separate farms.

READ: PNP destroys P21.5-M worth of marijuana plants in Kalinga