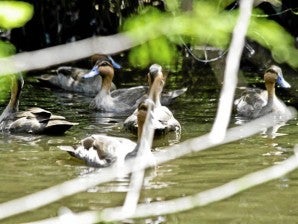 The Philippine duck, Anas Luzonica, has found safe haven in Cabagan, Isabela, after the Department of Environment and Natural Resources declared the Malasi Tree Park and Wildlife Sanctuary there as a “critical habitat” for the fowls.

The designation of the critical habitat is in accordance with Republic Act (RA) No. 9147, also known as the Wildlife Resources Conservation and Protection Act.

“This is a major step to conserve and protect the Philippine duck as the area becomes now a protected area, which means that the communities around it should make an effort to minimize human activities that will have adverse impact to the animal,” Environment Secretary Ramon Paje said.

The Philippine duck is known as “the tropical version of the mallard,” a type of duck commonly found in more temperate regions. According to the International Union for Conservation of Nature (IUCN), the population of the Philippine duck is dwindling. It has classified the fowl as as “vulnerable” under its Red List of Threatened Species.

The 178-hectare Malasi area is popular among avid bird watchers as it is a known sanctuary for various species of ducks, herons and other migrant birds. It has also been found to support a significant population of the Philippine duck.

The Malasi Park is the second area declared as sanctuary for the ducks, which are endemic to the Philippines. In September 2011, the DENR announced that the 27-hectare wetland area in Cabusao, Camarines Sur, as a critical habitat for the fowls.

Critical habitats are areas preserved to support the existence of a certain plant or animal species, whether they are migratory or naturally occurring in an area.