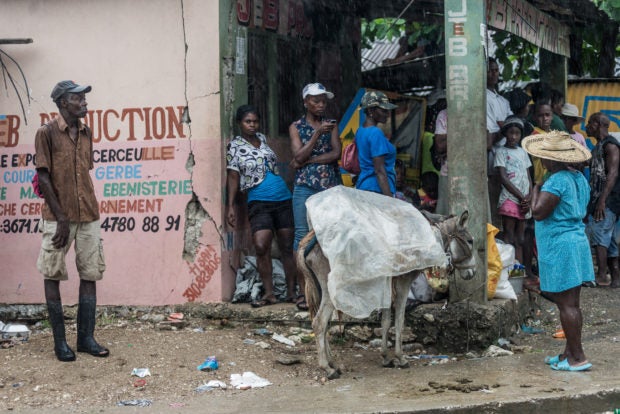 Scene of life at the market in the town of Maniche, severely damaged in the quake, Haiti, on August 17, 2021. AFP

PORT-AU-PRINCE — The death toll in the major earthquake that struck Haiti on August 14 has risen to 2,207, authorities said Sunday, as attacks on aid convoys have complicated efforts to bring relief to survivors.

“New bodies have been found in the south,” said a statement from the country’s civil protection office, adding that 344 people remain missing and 12,268 have been listed as injured. The previously reported toll was 2,189 dead.

Search-and-rescue workers are continuing to pick through the jumbled mounds of debris left by the powerful 7.2-magnitude quake, but hopes of finding survivors were fading by the hour.

Haitian authorities said nearly 600,000 people were directly affected by the disaster and are in need of urgent humanitarian assistance.

But efforts to deliver food, water and medical supplies to quake victims have been complicated not just by road and bridge damage but by attacks on aid convoys by so far unidentified gangs.

“We have a security problem that is becoming more and more serious,” said Jerry Chandler, director of Haiti’s civil protection agency.

Since early June, a two-kilometer (1.2 mile) stretch of highway running to the southwest peninsula from Port-au-Prince has been unsafe to travel, amid persistent gang violence in a desperately poor neighborhood of the capital.

“We’re literally facing a problem of banditry, and we’re working flat out with the police, who are sending reinforcements to the south,” Chandler said.

Some of the worst destruction was in hard-to-reach rural areas, so the Haitian authorities have been using a United Nations helicopter and eight US aircraft to deliver aid.

Aid delivery in hard-hit Les Cayes, Haiti’s third-largest city, was being organized largely by inexperienced private groups or individuals, and fights have broken out amid those waiting for help.

“We don’t want to discourage the good Samaritans,” Chandler said, but he urged people to communicate with his office so it could help organize the most efficient delivery of aid to those in greatest need.

Brazil meantime joined in the aid efforts, dispatching a military KC-390 cargo plane carrying a team of 23 firemen and 10 tons of medical and emergency equipment to Haiti.

“Solidarity is a characteristic of the Brazilian people,” President Jair Bolsonaro said in announcing the flight.