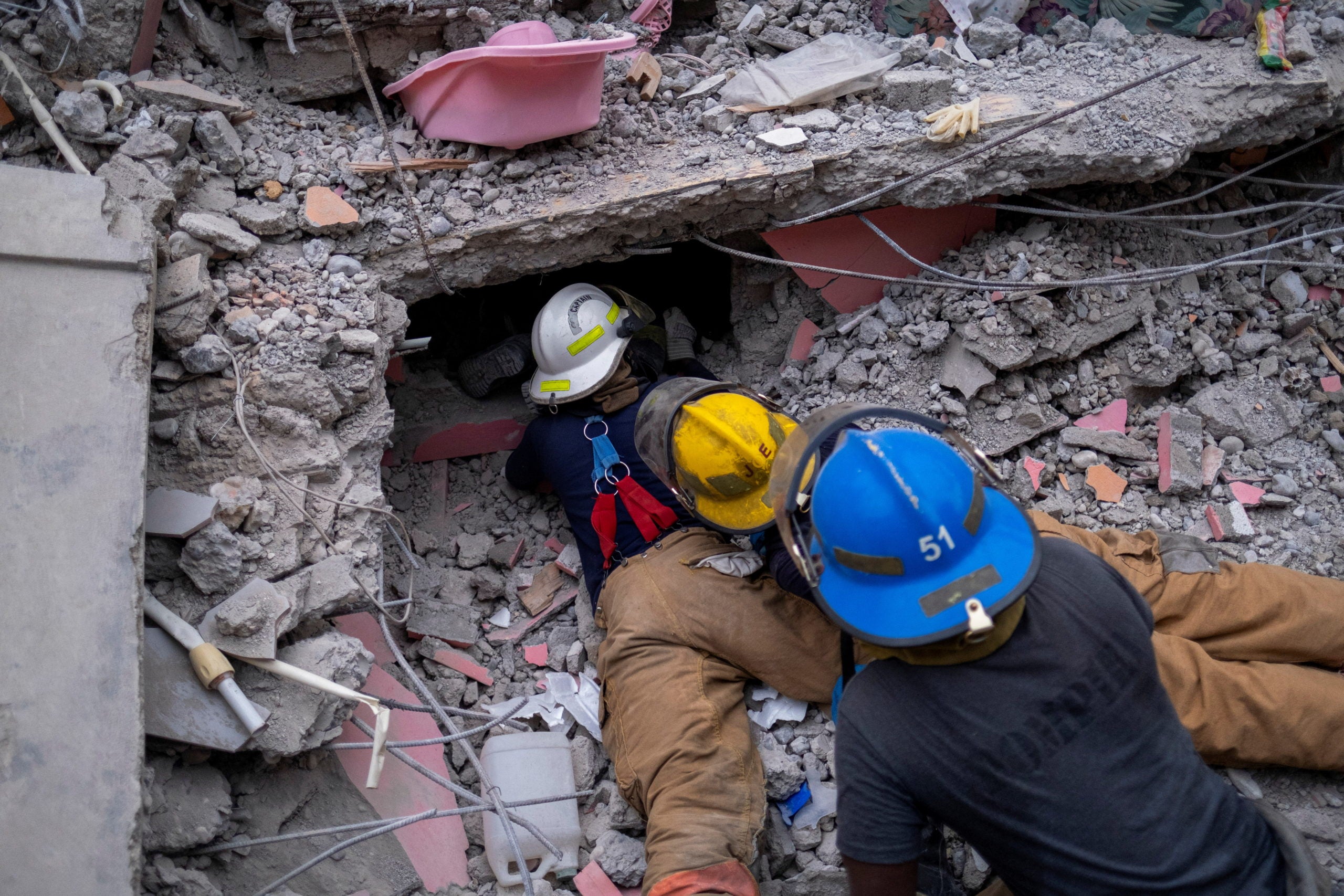 LES CAYES, Haiti — The preliminary death toll from the major earthquake that struck southwestern Haiti last weekend surged to 1,941 on Tuesday as the search for survivors resumed after a tropical storm passed and quake-hit Haitians clamored for food, shelter, and medical aid.

Hospitals struggled to tend to all those injured, the official tally of which rose to 9,915, with many people still missing or under the rubble, the Civil Protection Service said on Tuesday afternoon.

“There weren’t enough doctors and now she’s dead,” said Lanette Nuel, sitting listlessly next to her daughter’s corpse outside the main hospital of Les Cayes, one of the towns worst hit by both the tremor and the storm’s heavy rains and winds.

The 26-year old deceased woman, herself a mother of two, had been crushed by debris during the magnitude 7.2 quake. Now she lay under a white sheet on the floor.

“We came in yesterday afternoon, she died this morning. I can’t do anything,” her mother said.

The quake on Saturday brought down tens of thousands of buildings in the poorest country in the Americas, which is still recovering from a temblor 11 years ago that killed over 200,000 people.

Relief efforts were already complicated due to a weak state and difficult road access from the capital to the south due to gang control of key points. Flash flooding and landslides in the wake of Tropical Storm Grace, which by Thursday afternoon had continued on past Jamaica, further complicated matters.

“Countless Haitian families who have lost everything due to the earthquake are now living literally with their feet in the water due to the flooding,” said Bruno Maes, the United Nations Children’s Fund (UNICEF) representative in Haiti.

“Right now, about half a million Haitian children have limited or no access to shelter, safe water, healthcare, and nutrition.”

The United Nations said it had allocated $8 million in emergency funds to provide essential healthcare, clean water, emergency shelter, and sanitation for all affected people.

“We will continue to scale up our response to the hardest-hit areas,” U.N. Secretary-General Antonio Guterres said in a statement.

The hospital in Les Cayes, about 150 km (90 miles) west of the capital Port-au-Prince, was, even more, overwhelmed on Tuesday than before as patients who had been camping outside moved indoors overnight to escape the tropical storm.

Director Peterson Gede said medics were doing the best they could, but it was not enough.

“We couldn’t handle all the patients,” he said. “And we have been receiving supplies, but it’s not enough.”

At a tent city in Les Cayes containing many children and babies, over a hundred people scrambled to repair makeshift coverings made of wooden poles and tarps that were destroyed by Grace overnight. Some took cover under plastic sheets.

Mathieu Jameson, deputy head of the committee formed by the tent city residents, said hundreds of people there were in urgent need of food shelter and medical care.

“We don’t have a doctor. We don’t have food. Every morning more people are arriving. We have no bathroom, no place to sleep. We need food, we need more umbrellas,” said Jameson, adding the tent city was still waiting for government aid.

Haiti’s latest natural disaster comes just over a month after the country was plunged into political turmoil by the July 7 assassination of President Jovenel Moise.

U.S. national security adviser Jake Sullivan said on Tuesday it was too early to gauge the impact of the quake on Haiti’s political process and that the United States, the country’s main donor, had no current plans to deploy American military personnel to Haiti.

The U.S. Agency for International Development (USAID) said it had resumed rescue and relief operations on Tuesday morning after suspending them during the storm and was working with international partners to scale up assistance.

Several major hospitals were severely damaged, hampering humanitarian efforts, as were the focal points of many shattered communities, such as churches and schools.

Doctors worked in makeshift tents outside of hospitals to save the lives of hundreds of injured, including young children and the elderly.

Rescue workers have been digging alongside residents through the rubble in a bid to reach bodies, though few voice hope of finding anyone alive. A smell of dust and decomposing bodies permeates the air.

“We came from all over to help: from the north, from Port-au Prince, from everywhere,” said Maria Fleurant, a firefighter from northern Haiti.

With about 37,312 houses destroyed by the quake, according to Haitian authorities, and many of those still unexcavated, the death toll is expected to rise.

Prime Minister Ariel Henry, who was sworn in less then a month ago after Moise’s assassination, vowed to disburse humanitarian aid better than in the wake of the 2010 quake.

Though billions of dollars in aid money poured into Haiti after that quake and Hurricane Matthew in 2016, many Haitians say they saw scant benefits from the uncoordinated efforts: government bodies remained weak, amid persistent shortages of food and basic goods.

“The earthquake is a great misfortune that happens to us in the middle of the hurricane season,” Henry told reporters, adding that the government would not repeat “the same things” done in 2010.