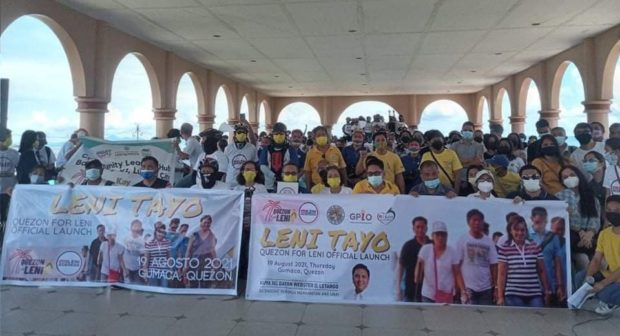 Photo from Quezon for Leni coalition

MANILA, Philippines — Several groups in Quezon province have launched a local campaign to urge Vice President Leni Robredo to run for president in the 2022 national elections.

Calling their initiative “Quezon for Leni,” the organizations staged a motorcade from Lucena City to Gumaca on Thursday.

According to lawyer Sunshine Abcede, one of the conveners of the Quezon for Leni coalition, their undertaking was in preparation for Robredo’s possible candidacy in 2022.

Robredo has yet to make a decision about her political plans after finishing her term as the second-highest leader of the country next year.

“Groups supportive of Vice President Robredo have decided to consolidate their ranks to prepare for her 2022 campaign, both on the ground and on various social media platforms,” Abcede said.

In a message to INQUIRER.net, “Team Leni Robredo” acknowledged the coalition’s affiliation to their group.

Team Leni Robredo is an organization of volunteers who wants Robredo to run for president in 2022 and oppose the Duterte administration’s anointed candidate.

With less than two months left before the filing of certificates of candidacy for the upcoming polls, only the tandem of Senator Panfilo Lacson and Senate President Vicente Sotto III has announced their plans to run for president and vice president, respectively, next year.

Robredo has separately met Lacson and Senators Richard Gordon and Manny Pacquiao about the prospect of a united opposition slate in 2022 but no concrete plans have been made public regarding their meetings as of now.

INQUIRER.net asked the Office of the Vice President (OVP) for their comments on the recent movements asking Robredo to pursue the presidency, but they have yet to respond as of posting time.

But in the past, OVP has maintained that Robredo is still open to pursuing the presidency even if she has thought about — and was rumored — running for Camarines Sur’s gubernatorial post.

OVP spokesperson Barry Gutierrez has also appealed to Robredo’s supporters and the opposition several times to respect the Vice President’s decision-making process, as many factors are being considered such as winnability and family life.

READ: Robredo’s silence on 2022 plans not due to fear of trolls — spox