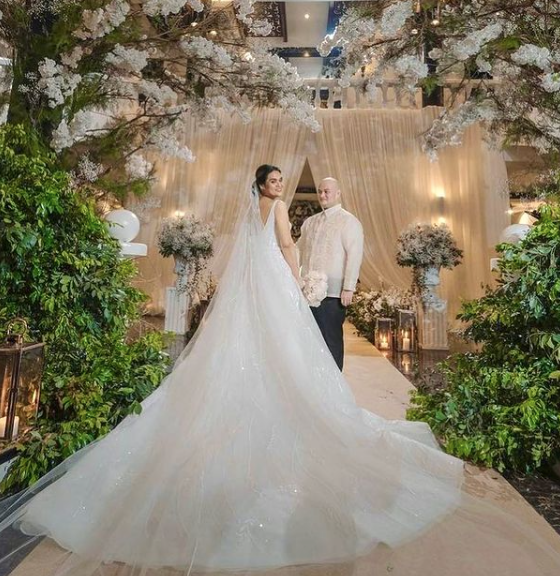 MANILA, Philippines — Saying her wedding day was made into a “political spectacle,” DUMPER PTDA Partylist Rep. Claudine Bautista said Thursday that she has never taken her eyes off the concerns of public utility vehicle (PUV) drivers in the country.

Bautista made the remark after receiving backlash from netizens and celebrities over her “lavish” wedding amid effects of the coronavirus pandemic on PUV drivers. DUMPER PTDA Partylist’s advocacy focuses on the marginalized PUV drivers in the country.

“First, I would like to acknowledge all of the sentiments asserted by everyone. I hear you, and I have internalized all of the grievances that were brought up in light of what was supposed to be a private and personal milestone,” Bautista said in a statement.

“Although given the situation, I would also like to express my sadness over how my wedding day, something that I have separated from my work as a public official, has been made into a political spectacle,” she added.

Responding to netizens who pointed out the extravagance she displayed during her wedding vis-a-vis the plight of her constituents, Bautista said: “Working for a public office, I have always valued the integrity of my work. I have always preferred to act silently and let my actions speak for themselves.”

“I know that I have been doing everything in my capacity to get our sector through this pandemic and I understand that there are still some issues and concerns that have yet to be fixed. I assure everyone that we have never taken our eyes off of these concerns,” she added.

“We advocated for the immediate release of financial assistance for PUV drivers by filing a House resolution and worked to ensure that the deadline for consolidation of PUVs is extended,” Bautista said.

In her personal capacity, Bautista claimed to have ensured the distribution of “more than 1.1 million grocery packs, PPEs, free insurance policies, and relief assistance… to affected PUV drivers and commuters.”

“From my personal funds, I have donated P3 million to doctors and nurses to ensure that their tireless sacrifice is recognized,” she further said.

Bautista urged the public to focus on the pandemic.

“Moving forward, I want to move past this issue and focus on pressing matters – the pandemic and serving better my constituents. I will no longer indulge in the statements by people of influence against me as I will leave it up to my legal team to address this,” Bautista said.

“As a public servant, I have always been transparent with my office’s accomplishments and ongoing efforts, and we will continue to do so despite detractors aiming to change the narrative and devalue our achievements,” she added.

Bautista said it was never their intention to make her wedding a public issue, as she expressed sadness over how their private celebration became a topic of conversation.

To recall, the issue broke out after Dubai-based designer Michael Cinco, who designed Bautista’s wedding dress, posted a picture of the lawmaker at the event. Reports claimed that a Michael Cinco couture gown commands a tag price of over a million pesos.

The couple also sought the services of celebrity florist Gideon Hermosa to bedeck their church and wedding reception, held at the prime wedding destination of Balesin Island in Quezon province.

But Bautista said the wedding had been in preparation even before the pandemic. She said any extravagance displayed during the ceremony was a product of her husband’s hard work.

“My husband has been planning this special day with me for years even before the pandemic, and it pains us to see how things after our wedding turned out. This was supposed to be the culminating event of a decades-long love story,” Bautista said.

“We both found many of the comments heartbreaking. This celebration of our love was a product of my husband’s hard work,” she added.

Bautista said Cinco has since apologized to her over the post “for bringing unwanted attention to an event that was supposed to be separate from my life as a public servant.”

“I have dedicated most of my life to public service, but I was hoping to have this experience in private with my husband, the same way that most people who marry the love of their lives do,” Bautista said.

“We had no intention of making our wedding a public affair, so we kept it as intimate as possible,” she added.

Among those who criticized the wedding were celebrities such as Agot Isidro and Enchong Dee.