In rant vs COA, Duterte overlooks key element in war on graft—transparency 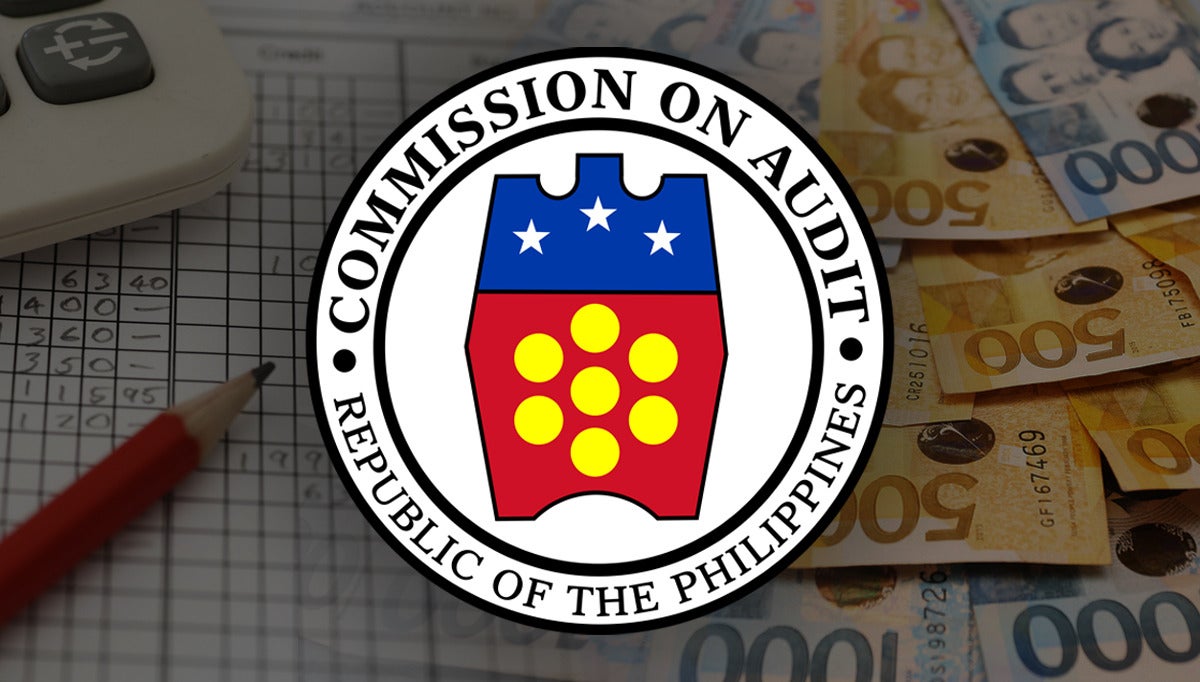 MANILA, Philippines—If corruption is a disease, U2 lead and activist Bono once said, the cure should be transparency.

It has not been sufficiently explained, but Philippine President Rodrigo Duterte’s rant against the Commission on Audit (COA), the government’s spending watchdog, for making public its audit reports ran counter to his campaign promise to weed out corruption if there’s even a “whiff” of it.

Later, in exasperation according to his Cabinet officials, Duterte would appear to give up on the fight against corruption when he said it was so deeply ingrained that the only solution would be to declare martial law, get rid of everyone and build a new bureaucracy.

When he directed his ire at COA, it seemed like he forgot that the audit agency was created by the Constitution with the mandate to “examine, audit and settle all accounts pertaining to the revenue and receipts of and expenditures or uses of funds and property owned or held in trust by or pertaining to” the government.

COA, the Constitution said, has the responsibility to submit “annual report covering the financial condition and operation of the government” to the President and Congress.

To protect COA’s work from influence by the three branches of government—executive, legislative and judiciary—the Constitution clothed the agency with independence as a constitutional body with its members protected by security of tenure.

Last Monday (Aug. 16), Duterte, in a public address, told COA: “Stop that flagging. You make a report, do not flag. Do not publish it because it would condemn the agency or the person that you are flagging.”

He was obviously referring to a series of news reports citing COA audit reports that are available on the audit body’s website in keeping with the principle of transparency.

Duterte went a step further by directing department heads to “ignore” COA because “nothing happens anyway.”

It was Duterte’s latest rant against COA but consistent with his previous statements about the spending watchdog. In response to now senator Imee Marcos’ complaint, Duterte vented his ire on COA saying in jest that auditors should be kicked and thrown down the stairs.

In 2018, Duterte’s remarks were called out by Heidi Mendoza, former COA chief, who said: “Not one of the past honorable presidents of our land has called on another institution, subject under our authority, to defy our rules.”

A closer look at COA’s record would show Duterte’s conclusion that nothing happens with audit reports or the work of COA is far from the truth.

READ: Lawmakers defend COA after it gets flogged by Duterte over DOH audit

COA’s audit had exposed irregularities in government transactions—findings that prompted the firing of government officials and decisions that had been affirmed by the Supreme Court. Some audit reports had prompted some officials to resign out of delicadeza. 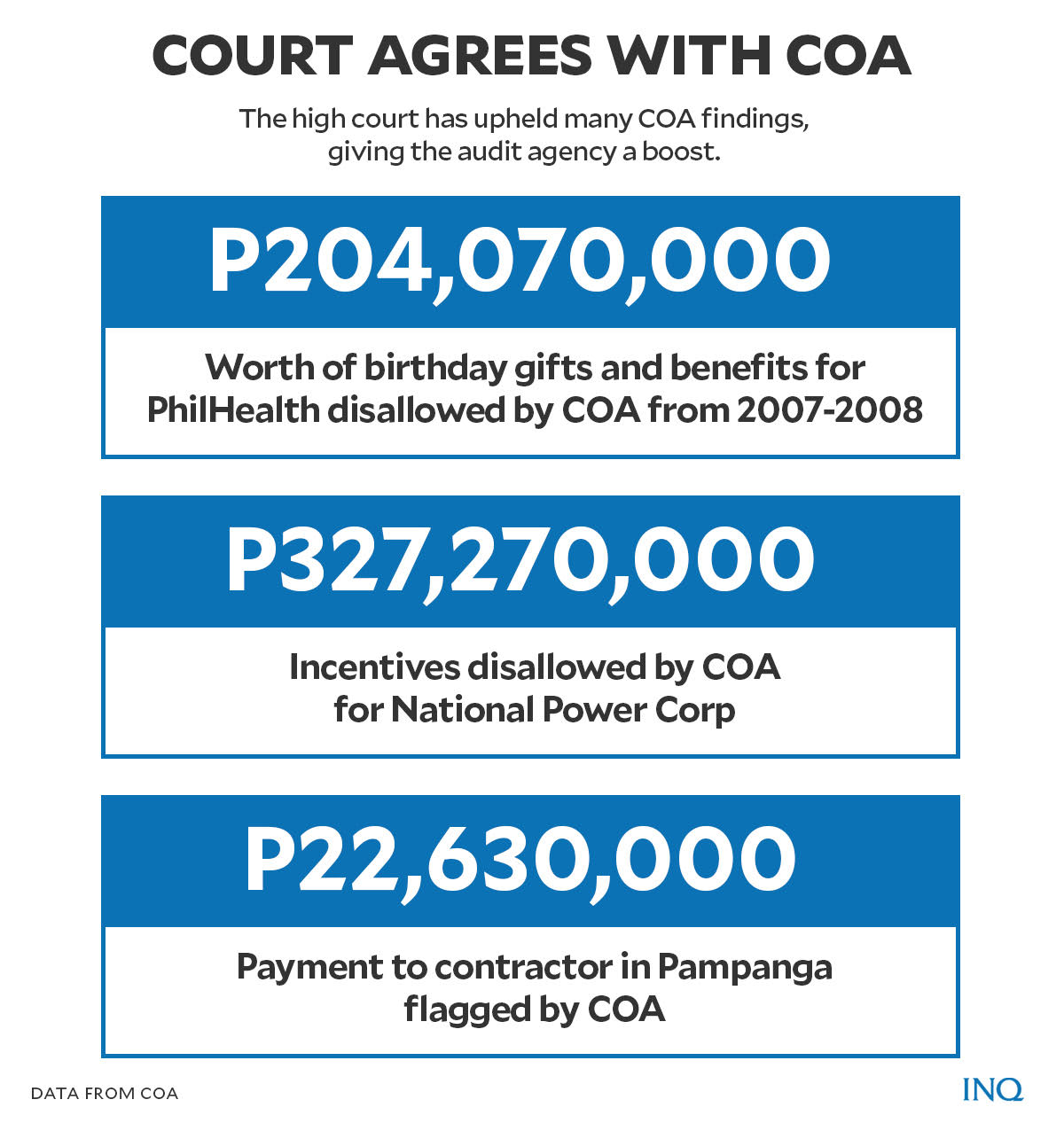 Recently, the high court upheld COA findings against the legality of spending P204.07 million on birthday gifts and benefits for officials and employees of the scandal-ridden Philippine Health Insurance (PhilHealth) Corp. from 2007 to 2008.

The Supreme Court also affirmed a COA decision to disallow the spending of P327.27 million on so-called performance incentive benefits to some officials and employees of the state-owned National Power Corp., which is still saddled with hundreds of millions of pesos in debts because of past mismanagement.

The high court also sided with COA in disapproving the payment of P22.63 million to a contractor for a road rehabilitation project in the town of Mexico, Pampanga province in 2010.

Data from March 2021 showed that as of the year’s first quarter, 55.27 percent of COA decisions had been upheld by the Supreme Court. At least 39 of 58 COA orders of execution had been enforced. 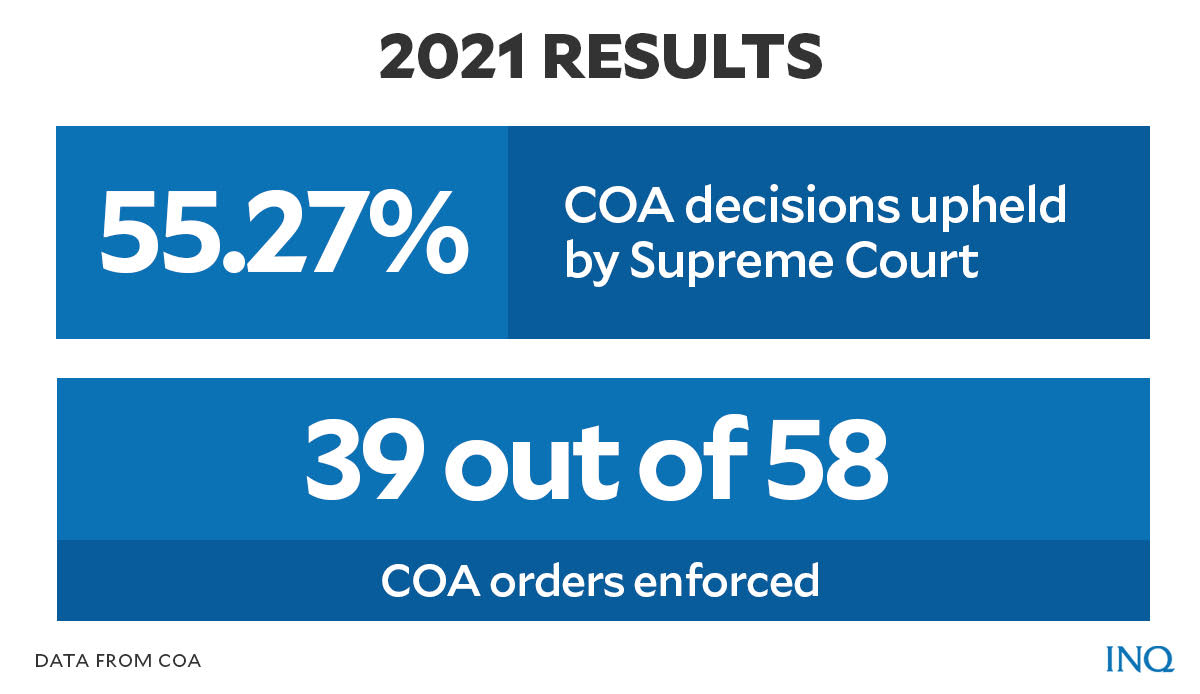 The same set of data showed that as of March 2021, COA issued at least 15 notices of disallowance and charges to several government offices for questionable fund use. A disallowance is defined as disapproval of disbursements while a charge is term used for lapses in revenues or receipts discovered by an audit.

According to 2018 data from the Ombudsman, at least 320 complaints have been filed against government officials for violation of the Anti-Graft and Corrupt Practices Act. At least 71 cases have been filed for malversation through falsification of public documents, the same Ombudsman data said.

Part of COA’s mandate is to recommend the filing of complaints to the Ombudsman, but the data were not clear about how many of the cases had been recommended by the audit body.

Mendoza said Duterte’s assessment of audit findings about lack of documents explaining the release of funds by government agencies missed the point about audit.

“Those are not mere papers,” said Mendoza.

“There are papers called accountability documents. If those papers are missing, there is a need to find it to identify if those were intentionally hidden,” she said. 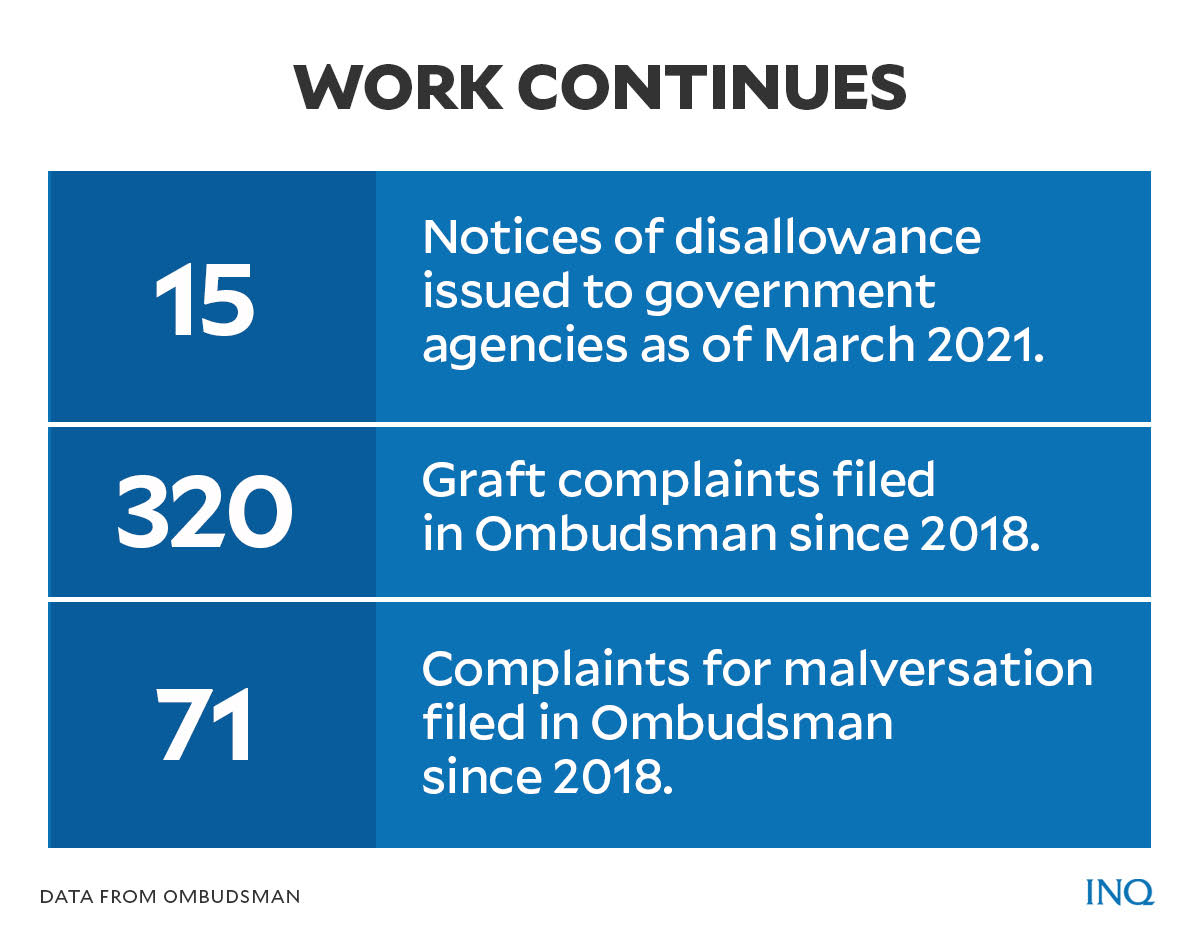 She said audit identifies gaps in “risk management” and “deficiencies” in government handling of funds, which are mostly taxes from the people.

Audits also identify whether an agency or finance practices in an agency represent “compliance risk.” If there’s an increase in compliance risk, “the opportunities for corruption likewise intensify,” said Mendoza.

“Seriously, we need to communicate the fact that while it is true that there is no corruption, the compliance risk is high and in a permissive operating environment where controls are relaxed because there is lockdown, this is conducive to corruption,” Mendoza said.

READ: Ex-commissioner to Duterte: COA loves you, but this is no cheering squad

She was apparently referring to relaxed rules on government purchases during the pandemic. Under pandemic rules, government agencies may resort to negotiated contracts for products or services that are considered urgent and related to the government’s COVID-19 response. This was on the premise that normal processes, like the public bidding requirement, would delay the acquisition of medical supplies and other products needed for pandemic response.

Mendoza said if the government was not “hiding” anything, it should even welcome COA audit and the red flags that the agency marks fund disbursements with if these are questionable.

Government officials, said Mendoza, should not condemn COA for doing its work because in so doing, the audit agency helps in good governance and performs its constitutionally-mandated tasks.

In 2020, following the COA finding that official records of PhilHealth may have been tampered with to hide its real financial standing, senators were prompted to file a resolution to investigate alleged persistent irregularities.

Party-list representatives also filed a resolution calling for an investigation of alleged anomalies in the distribution of resources by PhilHealth intended to help Filipinos cope with the COVID catastrophe.

A multi-agency task force was also created to investigate reports of corruption in PhilHealth. The COA recommendation to file criminal and administrative cases against former PhilHealth chief Ricardo Morales and several other officials of the state-owned firm were approved by Duterte.

The House of Representatives asked Health Secretary Francisco Duque III to participate in a hearing on the use of public funds by his department in pandemic response.

One of the harshest critics of the Duterte administration, Bayan secretary general Renato Reyes, said the President should be supporting COA in stemming irregularities in the government and hold “corrupt and careless” officials accountable.

Reyes said even while COA was not done yet with its audit of the DOH, the President “already absolved” Duque. Aside from his rant against COA, Duterte followed it up with a statement declaring he continued to trust Duque and that if the health chief resigned, it wouldn’t be accepted.

Incomplete paper work on fund releases, according to Duterte, “does not mean that money was stolen.”

As the fight against corruption swings like a pendulum in the Philippines, the words of Pope Francis come to light: “Corruption is paid for by the poor.”