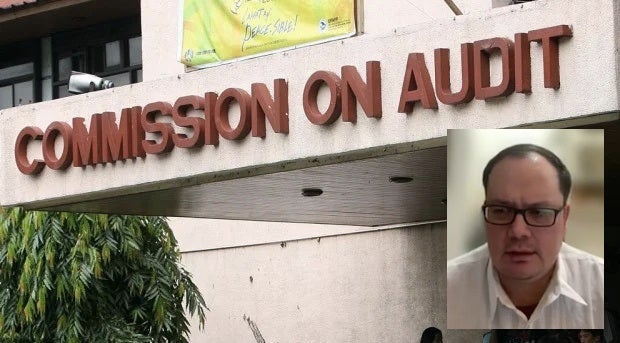 Commission on Audit Chairman Michael Aguinaldo (inset) attended the House hearing on Department of Health “deficiencies” on Tuesday, Aug. 17, 2021. (Inset photo from a House of Representatives video. The background is a INQUIRER.net file photo)

MANILA, Philippines — Lawmakers defended the Commission on Audit (COA) on Tuesday after it received a verbal flogging from President Rodrigo Duterte for flagging deficiencies in the use by the Department of Health (DOH) of its allotments and for allegedly implying corruption, particularly in connection with a P67.3-billion fund for pandemic response.

They reminded the president that the COA was an independent constitutional body whose mandate included publicly disclosing expenditures by state agencies.

They said Duterte should investigate the DOH instead of scolding the state auditing body for doing its job.

In his regular televised address to the public on Monday night, Duterte said the deficiencies cited by the COA only concerned the production of documents “to complete the story” of the spending by the DOH.

“It’s impossible for you to steal P67.3 [billion]. To the issue of whether the money has been stolen, that is pure bullshit,” he said.

“Stop that flagging, goddamnit!” Duterte told the COA. “Do not flag and do not publish it (audit report) because it will condemn the agency or the person that you are flagging.”

“The flagging is spelled f-l-a-g-g-e-d. What you are doing is f-l-o-g-g-i-n-g. Flogging, striking,” he said. “And yet you know that when you flag, there is already a taint of corruption by perception.”

The COA, however, did not accuse the DOH or any official of stealing any public funds in its annual report. In a statement last week, it said state auditors did not mention any finding that DOH funds were “lost to corruption.”

“You did nothing wrong. Why would you resign?” Duterte said.

In its report, the COA said the deficiencies in the handling of the P67.3-billion pandemic response fund were caused by noncompliance with pertinent laws, rules and regulations, and undermined the timely and efficient response to the pandemic last year.

It said the DOH failed to utilize P59.124 billion of its 2020 budget and was unable to use as much as P11.8 billion of the COVID-19 funds, which meant that these “were not translated [into] much-needed health supplies, equipment and services that could have benefited both the health workers and the general public during the critical times of the pandemic.”

Sen. Risa Hontiveros said Filipinos should thank the COA because its reports point out what needed to be corrected in the DOH.

“I thought this administration wants to end corruption? Why would it again harass an agency that is watching over the billions of public funds?” Hontiveros said.

It is the “neglect, irregularities and mismanagement” in the DOH which are being tolerated by Malacañang that is the problem, not the state audit body, said Sen. Francis Pangilinan.

“Why are they now scolding the agency which exposed the failure, instead of holding the officials who fail liable?” he said.

Sen. Juan Miguel Zubiri said the Senate always respected the COA’s findings and would use them as a guide on fund allocation during budget deliberations.

“Their job is to check and scrutinize whether there is deficiency, inefficiency, misfeasance, malfeasance or government inaction on funding,” he said.

Presidential spokesperson Harry Roque said Duterte was aware that the COA was an independent constitutional body, but his only problem with it was that its report “unnecessarily alarmed” people and created the impression that pandemic funds were not spent when these were actually used.

As for the president’s directive to the DOH to ignore the COA, he said Duterte was just “frustrated because the people’s understanding of the initial observations is that there is condemnation.”

At a House hearing on the report on Tuesday, Duque criticized state auditors for making their report public without giving the DOH time to respond.

“This is really unfair, unjust. That this judgment has been handed down clearly without giving the DOH the full 60 days within which we should have given our rejoinder and reported on the actions to their recommendations,” he added.

“You should come here and do our work,” he said, speaking from his office during the online hearing.

Duque said health officials had been “sleepless” due to “shame” as they were “bloodied and bludgeoned with this issue.”

But COA Chair Michael Aguinaldo insisted that due process was observed and there were several meetings and an exit conference with the DOH before the report was released.

“We are partners of the government, so the mandate and independence of audit institutions should be recognized,” she told the Inquirer in a phone interview.

In a Facebook post following Duterte’s remarks, Mendoza defended the COA staff, saying that they were just “ordinary folk” who had “no personal interest to gain fame or be exploited by politics.”

Mendoza was appointed as COA commissioner in 2011 by then President Benigno Aquino III. In 2015, she became the COA’s officer in charge after the term of then COA Chair Grace Pulido Tan expired.

“The right of the people to information cannot be negated and quashed by invoking that officials should be shielded from ‘corruption by perception,’” said Albay Rep. Edcel Lagman.

“Instead of immobilizing the COA, Mr. Duterte must order the prosecution of the responsible officials of the agencies flagged by the COA and accord them due process,” Lagman said.

“He said he would fire officials even with just a whiff of corruption. But why is he silencing the agency that guards against corruption, and protecting those who committed irregularities in using public funds?” he said.

Gabriela Rep. Arlene Brosas said the audit findings on the DOH “are beyond one whiff” of corruption as these sent out a “massive stench of underspending, misuse and even tell-tale signs of corruption.”