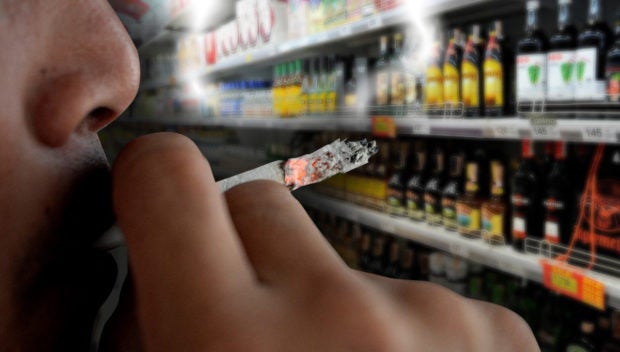 MANILA, Philippines — The coronavirus pandemic appears to have made some 40 percent of Filipino adults turn to alcohol, while 15 percent smoke tobacco, according to a survey of the Department of Health (DOH) that revealed unhealthy lifestyle habits among Filipinos.

A mobile survey conducted by the DOH on 3,087 Filipino adults in January this year focused on risk factors for non-communicable diseases (NCDs). The respondents are subscribers to three leading mobile phone networks and were randomly selected.

“On alcohol use, consumption was high, with 4 in 10 Filipinos (40.1%) reporting that they drank alcohol in the 30 days prior to the survey. Alcohol use was higher in men compared to women, with 51.4% of men and 28.9% of women reporting current drinking use,” the health department said in a statement Tuesday.

The DOH added that one in three adult Filipinos (33.1 percent) reported drinking six or more glasses in a single drinking occasion. Men reported higher rates of heavy drinking occasions at 43.2 percent compared to women at 22.9 percent.

“On tobacco use, the survey revealed that overall, 15.5% of Filipino adults are tobacco smokers, with 22.6% of men and 8.5% of women currently smoking tobacco,” the agency added.

According to the DOH, approximately 1 in 10 adult men (13.4 percent) smoked tobacco on a daily basis compared to women (4.4 percent). Men also reported higher rates of “smokeless tobacco use” at 6.2 percent, compared to 1.6 percent among women.

Dietary salt intake was likewise high with 60.2 percent saying that they always or often added salt “in some form” when cooking or preparing food.

“Overall, 1 in 10 adults Filipinos reported receiving a clinical diagnosis of raised blood sugar or diabetes (14.1% among men and 11.3% among women). Of these, half (49.2%) were currently under diabetes medication,” the DOH added.

A quarter of adult Filipinos (25.8 percent) reported being told that they were hypertensive by their doctor, and 54.5 percent are currently on medications to control their hypertension.

The DOH said NCDs continue to contribute to death and disability in the country, but their effects can be reversed by modifying daily habits including tobacco use and alcohol consumption, unhealthy diet and physical inactivity.

“Results of the study will provide the DOH supplementary national data in addressing NCDs in the country even as we make health services more available and responsive to more people and move towards Universal Health Care,” said Health Secretary Francisco Duque III.

In 2018, the DOH, citing experts from the United Nations, claimed that out of every three Filipinos, one dies before the age of 70 from a non-communicable disease.

According to the DOH website, major NCDs such as cardiovascular disease, cancer, chronic obstructive pulmonary disease, and diabetes mellitus are among the leading causes of death in the country.