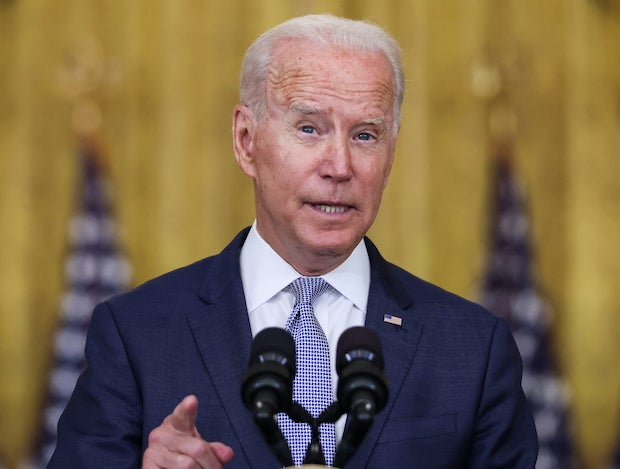 U.S. President Joe Biden discusses his ‘Build Back Better’ agenda and administration efforts to “lower prescription drug prices” during a speech in the East Room at the White House in Washington, U.S., Aug. 12, 2021. (REUTERS)

WASHINGTON — U.S. President Joe Biden said on Saturday that he had approved additional military forces to go to Kabul to help safely draw down the American embassy and remove personnel from Afghanistan.

In a lengthy statement, Biden defended his decision to withdraw U.S. troops from Afghanistan, arguing that Afghan forces had to fight back against Taliban forces sweeping through the country.

“Based on the recommendations of our diplomatic, military and intelligence teams, I have authorized the deployment of approximately 5,000 U.S. troops to make sure we can have an orderly and safe drawdown of U.S. personnel and other allied personnel,” Biden said, adding it would also be to evacuate some Afghans going through a special visa program.

A U.S. defense official, speaking on the condition of anonymity, said of the 5,000 Biden announced, 4,000 were already previously announced but about 1,000 were newly approved and would be from the 82nd airborne division.

Biden said that his administration had told Taliban officials in Qatar that an action that put U.S. personnel at risk, “will be met with a swift and strong U.S. military response.”

But he also said an indefinite U.S. military presence was not an option.

“One more year, or five more years, of U.S. military presence would not have made a difference if the Afghan military cannot or will not hold its own country. And an endless American presence in the middle of another country’s civil conflict was not acceptable to me,” Biden added

The Taliban have swept through much of Afghanistan, capturing a major city in northern Afghanistan on Saturday and drawing closer to Kabul, where Western countries scrambled to evacuate their citizens from the capital.