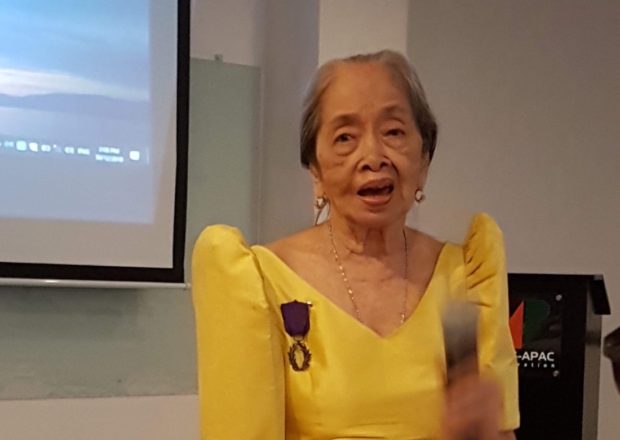 ALSO A HISTORIAN Virginia “Virgie” Moreno delivers remarks at a film showing she hosted in December 2018 to mark Jose Rizal’s martyrdom. The film, “Mi Ultimo Adios” in sign language, was made by a protégé, one of many young filmmakers that she supported. The affair was attended by the national hero’s descendants. —LINDA BOLIDO/CONTRIBUTED

MANILA, Philippines — The poet, playwright and arts organizer Virginia “Virgie” Reyes Moreno died on Saturday morning after a lingering illness. She was 98.

Known for her grace and graciousness, Moreno earned lofty monikers such as “The High Priestess’’ or “Empress Dowager of Philippine Poetry”—conferred by no less than National Artist for Literature Jose Garcia Villa—both for her published works and the energy she devoted to stoking the creative spirit of likeminded artists who held her in high esteem.

She was the only female member of Villa’s coterie of younger writers known as “The Ravens.”

Moreno published only one collection of poems, “Batik Maker and Others,” but it was a slim volume of peak lyrical power when it came out in 1972. The titular piece “Batik Maker” and “Order for Masks,” for example, went on to become gems in Philippine literature in English, featured and studied in textbooks. The collection won first prize in the Carlos Palanca Memorial Award for Literature.

Moreno was born in Tondo, Manila, on April 24, 1923. She was the older sister of the late fashion designer Jose “Pitoy” Moreno, himself an icon in his field. (She later headed a foundation set up in his memory.)

Their father, a ship captain, died when Virgie was about 6 years old. The siblings were then raised by their mother, a rice trader, at a house on Juan Luna Street in Gagalangin.

Moreno earned her bachelor’s and master’s degrees at the University of the Philippines (UP) and pursued further studies at the Kansas Institute for International Education, the British Film Institute and the International Writing Program in Iowa.

In 1976, she became the founding director of the UP Film Center, around the same time she was teaching humanities at the state university.

Outside the academe, she chaired the Unesco Culture Committee of the Philippines.

In 1984, she received the SEAWrite Award in recognition of her stature in the arts and letters of Southeast Asia. In 1991, the French government named her Chevalier (knight) in the Ordre des Palmes Academiques, a national honor bestowed on academics for their valuable contributions to education and science.

As a playwright, Moreno is best known for “The Onyx Wolf,” which won the National Historical Playwriting Contest in 1969. The play is also known as “La Loba Negra” and “Itim Asu.”

Adapted for dance and staged in 1970, 1984 and 1990, “Itim Asu” was scheduled for another run starting February 2020 as part of Ballet Philippines’ 50th season at the Cultural Center of the Philippines, with music by National Artist Antonino Buenaventura and choreography by Alice Reyes. The author was able to join the audience for a special one-off presentation, before the rest of the performance dates were canceled due to the pandemic.

Moreno’s wake will be held at Funeraria Paz at Manila Memorial Park, Parañaque City, on Aug. 16. The family on Saturday said that due to community quarantine restrictions, viewing will be for family members only.

Burial will be on Aug. 17. An online memorial will be held on the ninth day after her death, details of which will be announced soon.