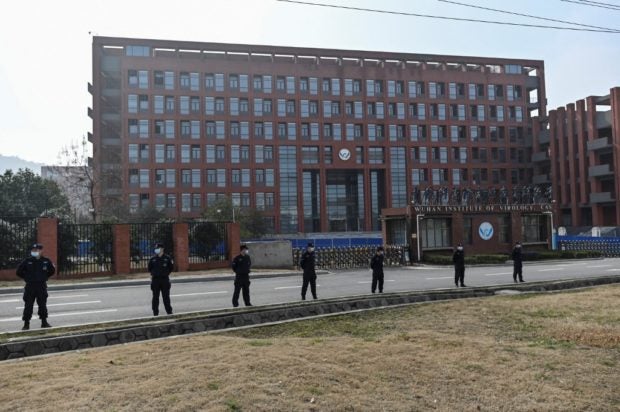 This general view shows the Wuhan Institute of Virology in Wuhan, in China’s central Hubei province on February 3, 2021, as members of the World Health Organization (WHO) team investigating the origins of the COVID-19 coronavirus, visit. (Photo by Hector RETAMAL / AFP)

GENEVA – The WHO on Thursday urged China to share raw data from the earliest COVID-19 cases to revive its probe into the origins of the disease, as Russia recorded record deaths.

The World Health Organization’s plea came as Russia saw its highest daily death toll from the pandemic that has killed at least 4.3 million people worldwide.

The WHO stressed it was “vitally important” to uncover the origins of the virus first detected in the Chinese city of Wuhan in December 2019.

In the face of pushback from Beijing, the UN health agency called for the provision of “all data and access required so that the next series of studies can be commenced as soon as possible”.

After much delay, a WHO team of international experts went to Wuhan in January 2021 to produce a first phase report, which was written in conjunction with their Chinese counterparts.

It said the virus jumping from bats to humans via an intermediate animal was the most probable scenario, while a leak from the Wuhan virology labs was “extremely unlikely”.

However, the investigation faced criticism for lacking transparency and access, and for not evaluating the lab-leak theory more deeply.

A WHO call last month for the investigation’s second stage to include audits of the Wuhan labs infuriated Beijing, with vice health minister Zeng Yixin saying the plan showed “disrespect for common sense and arrogance towards science”.

After reading the phase one report, WHO chief Tedros Adhanom Ghebreyesus concluded that the probe into Wuhan’s virology labs had not gone far enough.

Meanwhile, Danish scientist Peter Ben Embarek, who led the international mission to Wuhan, said a lab employee infected while taking samples in the field falls under one of the likely hypotheses as to how the virus passed from bats to humans.

He told the Danish public channel TV2 that the suspect bats were not from the Wuhan region and the only people likely to have approached them were workers from the Wuhan labs.

“In order to address the ‘lab hypothesis’, it is important to have access to all data and consider scientific best practice and look at the mechanisms WHO already has in place.”

Analysing and improving lab safety and protocols “including in China, is important for our collective biosafety and security”, it said.

Russia, the fourth worst-hit country in the world in terms of cases, reported its highest daily coronavirus death toll since the start of the pandemic despite an intensifying vaccination drive.

A government tally reported 808 fatalities over the past 24 hours — the first time Russia has crossed the 800-mark for daily virus deaths — and 21,932 new infections.

Authorities have faced a vaccine-sceptic population, with a poll by the independent Levada Centre this week showing that 55 percent of Russians do not plan on getting a jab.

In the US, the health department is to require all its public-facing health care workers to get jabs amid a surge in hospitalisations driven by the Delta variant.

The policy will apply to around 25,000 Department of Health and Human Services employees who could come into contact with patients — just under a third of its total workforce.

“Our number one goal is the health and safety of the American public, including our federal workforce. And vaccines are the best tool we have,” US Health Secretary Xavier Becerra said in a statement.

Health is the third federal department to introduce a vaccine mandate, following similar edicts from the Department of Veterans Affairs and the Pentagon in recent weeks.

Average daily hospital admissions in the week to August 3 were 7,707 — a 40 percent jump in just one week, according to the Centers for Disease Control and Prevention.

And in signs that the epidemic’s economic impact is far from over, China on Thursday announced it was partially closing the world’s third-busiest cargo port after a worker tested positive for coronavirus.

Almost 2,000 front-line workers at Ningbo-Zhoushan port have been placed under “closed management” — effectively unable to leave the port — as a result of the infection, Chinese media reported.

The virus has also hit global oil demand — a bellwether for economic growth — due to lockdowns in major consuming countries fuelled by the Delta variant, the International Energy Agency said on Thursday.

Demand had been recovering, but it “abruptly reversed course” in July as the Delta variant undermined deliveries in China, Indonesia and other parts of Asia, the IEA said in a monthly report.

In Britain, however, the economy rebounded 4.8 percent in the second quarter as consumer spending surged with the relaxation of anti-virus restrictions, official data showed Thursday.