EU threatens Taliban with ‘isolation’ if it seizes power in Afghanistan 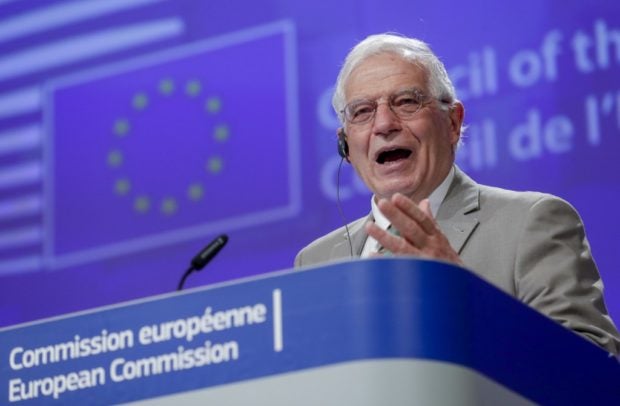 The European High Representative of the Union for Foreign Affairs, Josep Borrell attends a video conference with Europeans Foreign Ministers in Brussels, Belgium in this file photo taken on April 22, 2020, during a strict lockdown in the country. FILE PHOTO / AFP

BRUSSELS, Belgium — The European Union on Thursday warned the Taliban that it would face being cut off by the international community if it seized power through violence, as the insurgents sweep across Afghanistan.

“If power is taken by force and an Islamic Emirate re-established, the Taliban would face non-recognition, isolation, lack of international support and the prospect of continued conflict and protracted instability in Afghanistan,” EU foreign policy chief Josep Borrell said in a statement.

The Pentagon earlier said that it was deploying around 3,000 troops to Afghanistan immediately to evacuate US embassy employees securely as the threat grows from the Taliban insurgency.

The UK government followed suit saying it was sending 600 troops to Afghanistan to help British embassy staff leave the country, after the United States announced a similar deployment as the Taliban makes rapid gains.

Read Next
Pentagon, UK send troops to Afghanistan to evacuate embassy officials
EDITORS' PICK
NCR’s COVID-9 alert level may be downgraded from 3 to 2 soon — DOH
What’s at stake for every fighter at ONE: NextGen
FDA reviewing COVID-19 vaccines’ EUA for booster shots
Legarda emphasizes role of ICC/IPs in nation building this IP month
Climate Change Commission and Nestlé PH to discover sustainability-focused solutions
Biden vows to stand with Asia on freedom, hits at China on Taiwan
MOST READ
Drivers now required to take driver’s education upon license renewal – LTO
Gordon to Duterte: You? Teaching me courtesy?
Marcos Jr’s ‘special diploma’ from Oxford: You can have it, too
Can Marcos Jr. be disqualified?
Don't miss out on the latest news and information.