No major damage in Davao Oriental after 7.1-magnitude quake 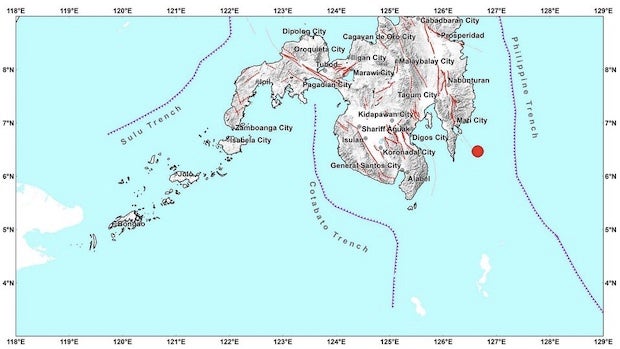 DAVAO CITY—Except for minor cracks at the Mati airport in Davao Oriental, no major damage in public infrastructure has been reported following the 7.1-magnitude earthquake that jolted parts of Mindanao and the Visayas early on Thursday.

According to an advisory from the Department of Transportation (DOTr), the Civil Aviation Authority of the Philippines (CAAP) reported minor cracks on the runway of the Mati airport during its preliminary inspection on Thursday, although no damage was detected in the passenger terminal and other structures so far.

The quake, with epicenter traced 95 kilometers southeast of Governor Generoso town in Davao Oriental, struck at 1:46 a.m. It was tectonic in origin and had a depth of focus of 39 kilometers.

It was felt at Intensity III in Kabacan, Cotabato; and Bayugan, Agusan del Sur; and at Intensity II in Cagayan de Oro City; in Maasim, Sarangani; and Arakan and Banisilan in Cotabato.

The Philippine Institute of Volcanology and Seismology (Phivolcs) said damage and aftershocks were to be expected following the quake, prompting affected local governments to organize teams to go around and survey the damage.

At least 60 minor earthquakes were recorded by Phivolcs in Davao Oriental as of 4:17 p.m. on Thursday. Six of these were measured at between 4 magnitude and 4.9 magnitude.

The DOTr found no damage in any of the port facilities managed by the Philippine Ports Authority and transport terminals and buildings overseen by the Land Transportation Franchising and Regulatory Board. The CAAP also found no damage so far in the Davao airport.

Ben Tesiorna, city information officer of Mati, said the inspection of private buildings and properties was ongoing. School buildings, the City Hall, local government offices, parks and public markets in the city were spared by the quake.

The local government of Panabo also said no damage had been found in high-rise structures in the city, such as Maryknoll College of Panabo and Rivera Medical Center. —GERMELINA LACORTE