Pinatubo quiet for now, back to normal status 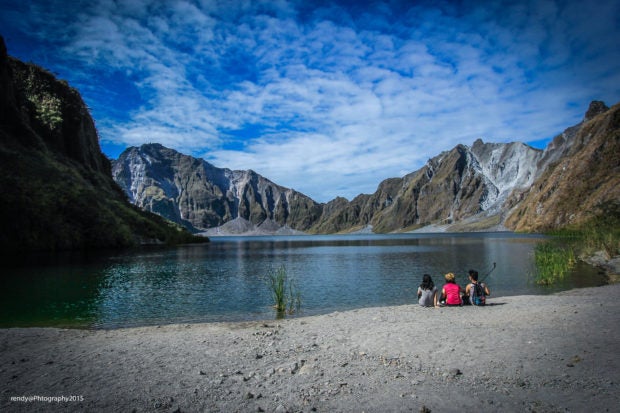 CALM AGAIN A group of tourists, in this photo taken in 2013, enjoys the serenity of Mt. Pinatubo’s crater lake. Government seismologists lifted the warning status on the volcano on Thursday, citing the fewer seismic activities recorded on Pinatubo in the last 42 days. —RENDY CONSTANTINO/CONTRIBUTOR

MABALACAT CITY—Mt. Pinatubo’s warning status was brought back to normal after fewer earthquakes were recorded around the volcano in the last 42 days, the Philippine Institute of Volcanology and Seismology (Phivolcs) said on Thursday.

In its latest bulletin, Phivolcs said the volcano’s status was scaled down from alert level 1 (low-level unrest) to alert level zero (normal), as it recorded only an average of two to three volcanic earthquakes on Pinatubo—with a magnitude between 0.8 and 1.3—from July 1 to Aug. 11.

The fewer seismic activities showed a “significant decrease” from the 12 or 13 volcanic earthquakes, with magnitude ranging from 0.7 to 3.2, logged from Jan. 28 to June 30.

Lowering Mt. Pinatubo’s status means the observational parameters have returned to baseline levels and the volcano is back to “a period of quiescence,” Phivolcs said.

Mt. Pinatubo is part of the mountain range in Zambales province that also straddles the nearby provinces of Pampanga and Tarlac in Central Luzon.

Phivolcs said the carbon dioxide flux from the volcano’s crater lake, which indicates deep magma degassing, was measured at 263 tonnes per day. Such an amount was within the background range of less than 1,000 tonnes per day recorded since 2008, it added.

Phivolcs said the ground deformation it detected on Pinatubo’s edifice since June last year was likely tectonic in origin, rather than volcanic.

Alert level 1 was raised from zero on March 4 following the series of earthquakes on Pinatubo.

According to Phivolcs, it was the first time that Pinatubo’s warning status was elevated since 1996 when it was placed on normal status.

In January alone, Phivolcs detected 826 “imperceptible” or not easily noticed earthquakes at the east-northeast of Pinatubo.

The agency said the volcano’s warning status might revert to alert level 1 if one or any of the monitoring parameters, such as volcanic earthquakes and carbon dioxide flux, would increase in the future.

But Phivolcs said entry to the Pinatubo crater area must still be done with caution, as rockfalls, landslides and “lethal volcanic carbon dioxide expulsions” could pose perennial hazards.

It also warned people living in valleys and active river channels near Pinatubo to watch out for sediment-laden stream flows and lahar flows in case of prolonged and heavy rainfall.

Pinatubo’s eruption on June 15, 1991, is considered the second largest volcanic blast of the 20th century.

The explosion produced “high-speed avalanches of hot ash and gas, giant mudflows and a cloud of volcanic ash hundreds of miles across,” according to the US Geological Survey. —JUN A. MALIG