Everyone loses in a fight with trolls — communication experts 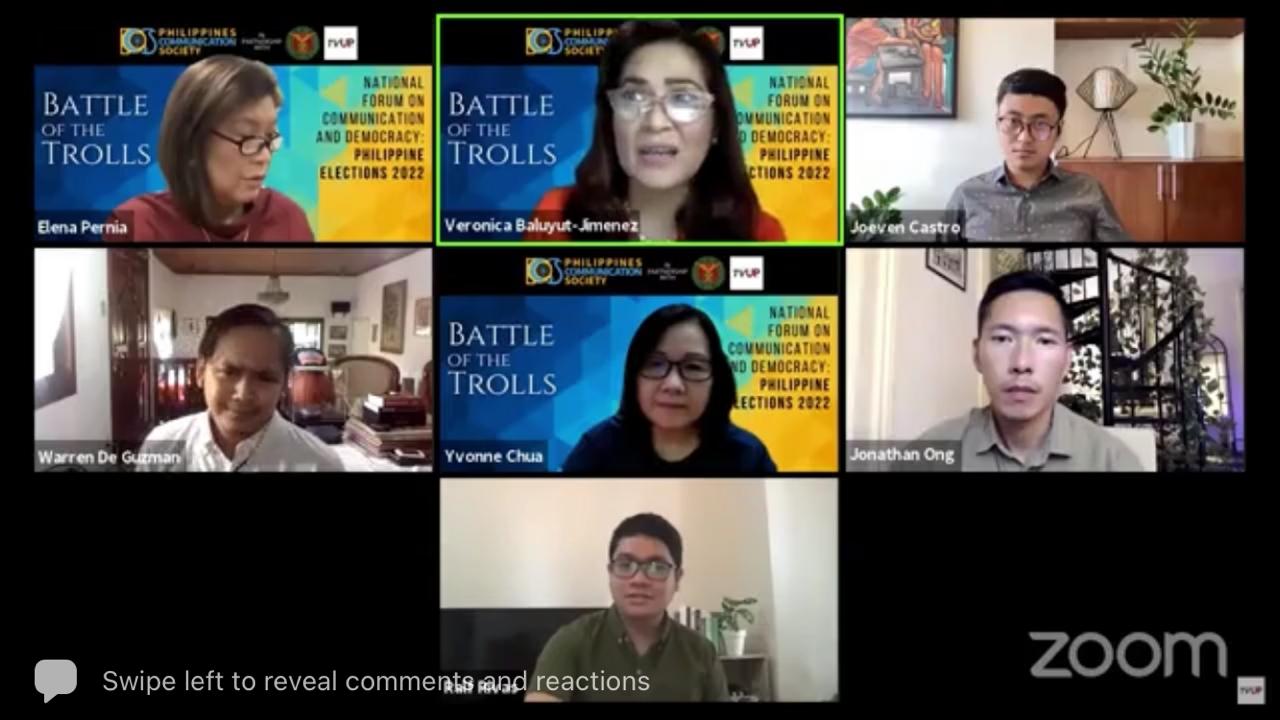 MANILA, Philippines — Everyone loses in a fight with trolls, communication experts said Wednesday.

The experts expounded on their views in a webinar titled “Battle of the Trolls” which tackled the issue of troll farms with the 2022 elections upcoming.

University of the Philippines journalism associate professor and veteran journalist Yvonne Chua said everyone loses in the fight with democracy becoming a casualty.

“I think everyone loses. The more obvious losers are victims and targets who endure the toll of being trolled. Democracy is also a casualty when disinformation and political trolling drown out voices, shrink civic space, and distort electoral outcomes. But, the trolls themselves are losers, I think, for surrendering their morals,” Chua said.

Joeven Castro, associate professor at the Department of Communication of Far Eastern University and member of the board of directors of the Philippine Association of Communication Educators, likewise said that everyone loses, noting that the financial reward of trolls is only temporary.

“Everyone is a loser. Democracy will be scourged. For the trolls, the financial reward is temporary. After using up your income, you will go back to the system of the poor traffic system, poor governance. Anyone who pays you to do these things does not have a genuine public concern. They just want to stay in power,” Castro said.

“Everybody is a loser in this battle. But, again we have to follow the money, and we have to note that because of social media and the current policies that we have, it’s extremely profitable. The troll or the organized trolls, especially during elections, we have to find a way wherein there’s no money in trolling… How do we do that? Provide better opportunities for everybody,” de Guzman explained.

UP College of Mass Communication professor Elena Pernia, who was formerly Philippine Daily Inquirer Readers’ Advocate and now Philippines Communication Society president, added that the state of democracy and trolls themselves are defeated in the battle.

Media outlet Rappler’s Ralf Rivas, meanwhile, suggested that public relations agencies regulate themselves. He stressed that it is not an issue of free speech, but of profiting on lies and fear.

For his part, Jonathan Ong, associate professor of global digital media at the University of Massachusetts Amherst stated: “For me, what our conversation here underscores is that we cannot depend on capitalism and its structures to sustain democracy.”