ER patients wait for days to be given COVID beds 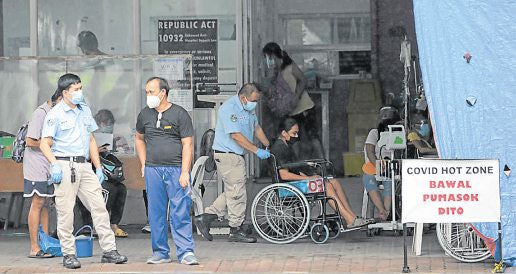 BUSY AGAIN: Emergency room doctors are noticing a “sustained increase” in COVID-19 cases and like during the March-April surge, the ERs are again busy and filling up fast with patients who had to wait for vacancies in hospital wards dedicated for people with the severe respiratory disease. (Photo by GRIG C. MONTEGRANDE / Philippine Daily Inquirer

MANILA, Philippines — As more and more people fall ill with COVID-19, the “waiting time” to move from the emergency room to a ward dedicated for patients with the severe respiratory disease is about two to three days at best, an emergency medicine specialist said on Tuesday.

Dr. Pauline Convocar said emergency room (ER) doctors saw a “sustained increase” in COVID-19 infections as early as mid-July, although the ER-to-ward movement, until last week, took only an average of 24 hours.

Describing a situation similar to what happened during the previous surges, Convocar said sick members of families again were arriving in clusters at hospitals, with elders presenting severe and critical symptoms.

There are also more people now with “younger profiles” being admitted, said Convocar, the immediate past president of the Philippine College of Emergency Medicine.

“It’s the same trend,” she said in a phone interview.

The waiting time in the emergency department depends on when a patient is discharged from the COVID-19 ward so it can accommodate another one, she said.

The additional cots and makeshift wards that most hospitals had prepared for the surge are filling up, Convocar said.

“The emergency department carries the burden, being the gateway, the entry point of the hospital,” she said.

Figures from the DOH show that on July 10, about two weeks before it disclosed local cases of the more contagious Delta variant of the coronavirus, 55 percent of ICU beds were in use along with 46 percent of isolation beds and 42 percent of ward beds.

At the start of the “time out” called by the medical community on Aug. 4, 2020, 55 percent of ICU beds, 52 percent of isolation beds, and 55 percent of ward beds were occupied. In addition, 30 percent of ventilators were in use.

The DOH said the current positivity rate in the country was 21.9 percent, meaning one in five people tested was positive for SARS-CoV-2, the virus that causes COVID-19. During the height of the March-April surge, the positivity rate peaked at 25 percent.

During the surge, Metro Manila hospitals were swamped with COVID-19 patients, with long lines forming outside emergency rooms as cases soared to more than 10,000 almost daily for 12 days starting March 29.

The government imposed enhanced community quarantine in Metro Manila, Bulacan, Rizal, Cavite and Laguna from March 29 to April 11 to help stop the spread of the virus.

At that time, Robert Mendoza of the Alliance of Health Workers said that 10-50 patients were on the waiting lists of emergency rooms in several big hospitals in Metro Manila.

Due to the lack of beds, some patients were referred to hospitals in nearby provinces. While tackling an increase of cases inside its boundaries, Calabarzon took in COVID-19 cases that spilled over from Metro Manila with public and private hospitals in the region running at critical or near capacity.

As Convocar had described, he told the Inquirer that patients had to wait for two to three days in emergency rooms before being transferred to a ward.

Convocar said the situation should not discourage other emergency cases from seeking hospital treatment since a separate admission pathway had been created for them.

She rallied fellow doctors to continue their work and the people to do their share.

“To my colleagues, hang on. To the public, keep practicing minimum public health protocols,” she said.

Convocar said there was no physical queueing or patients’ cars lined up outside the hospital in Metro Manila unlike what had been reported in Cebu, as mild to moderate cases were attended to through telemedicine or remote consultation.

“We call it smart queueing,” she said.

She said the lockdown could help cut the transmission, as doctors urged more people to get vaccinated and observe health protocols.

“Emergency departments are like a rubber band: It’s expandable. But you could only stretch it too far or else it breaks,” she said.

The health department said the “relatively low” case count was due to lower laboratory output on Sunday. It said 13 laboratories failed to submit their data on time.

The deaths and recoveries left 79,016 active cases. Of this number, 94.4 percent are mild cases, while 1.7 percent are asymptomatic, 1 percent critical, 1.7 percent severe and 1.18 percent moderate.