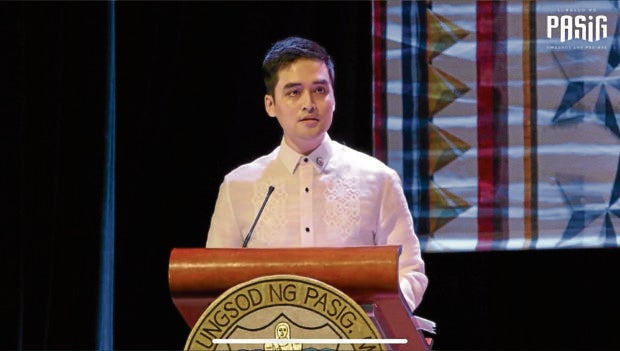 MANILA, Philippines — Pasig City Mayor Vico Sotto has assured his constituents from impoverished sectors who would not be receiving any cash aid amid the enhanced community quarantine (ECQ) status that grocery packs would be given to them.

Sotto explained in a Facebook post on Monday that the national government was able to provide P650 million for the ECQ aid — slightly lower than the P680 million allocated back during March 2021 to May 2021 lockdown.

This means that not all eligible residents may receive cash aid.

(Target beneficiaries for the cash aid from the national government: Expanded DSWD pockets of poverty [expanded, which means those who were included in the feedbacks last April 2021 who were not included back then but also needed assistance will now be given aid].)

(But we cannot really provide aid for everyone, especially those from sector-based organizations who joined the previous aid disbursement.  Note: only P650 million was allocated this time, compared to the last ECQ which was at P680 million.)

However, he relayed that Pasig’s local government unit (LGU) has already procured 260,000 grocery food packs even before the help from the national government came, which would be distributed to as many households as possible.

(Even before the national government’s assistance arrived, the LGU has already ordered 260,000 grocery food packs. Those included in the lists would receive Cash + Grocery Pack. Those who would need help but would not receive any cash aid would still receive grocery packs.)

Earlier, Social Welfare Secretary Rolando Bautista announced that Metro Manila LGUs have been directed to start disbursing the ECQ aid on Wednesday after the funds totaling P13.1 billion were downloaded.  This was confirmed by the Metro Manila Council, as mayors have agreed to start distributing cash aids on the said date.

The P1,000 cash aid per affected individual — with a cap of P4,000 per family — has been a much-debated topic as some experts and officials believe that it is not enough to feed even a small family through a two-week lockdown.

Last Wednesday, party-list group Bayan Muna called the assistance a “pittance”, reasoning that the government has spent a lot of money on less important projects like the dolomite beach at Manila Bay and the anti-insurgency campaign while refusing to give out the proposed P10,000 aid.

The group also took notice of the administration’s insistence on not certifying the Bayanihan to Arise as One Bill as urgent — which would have given the government ample assistance for people.

Sotto said that Pasig City residents should just wait for the social aid at their homes, preparing their PasigPass QR code which would be used before people obtain the LGU assistance.

(Please wait from your homes.  Teams would go to the ground to give instructions.  Just prepare your PasigPass QR code.  And because we’re in an ECQ, only families currently living in Pasig would receive aid.)

The ECQ declarations were made due to the threat of the dreaded COVID-19 Delta variant, said to be 60 percent more transmissible than the already infectious Alpha variant.

This will be the third time that Metro Manila is under an ECQ after the Luzon-wide lockdown in March 2020 — first in August 2020, second during the Alpha variant-led surge last March 2021, and then this latest ECQ declaration.