$1 trillion US infrastructure bill inches ahead with Senate votes 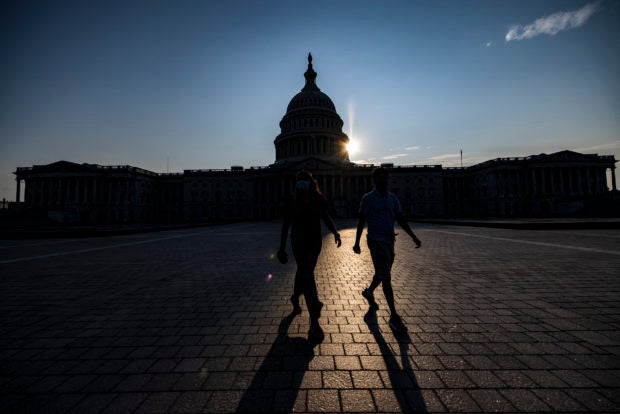 A couple walks past the U.S. Capitol Building as the sun begins to set behind them on August 8, 2021 in Washington, DC.  AFP

WASHINGTON — The U.S. Senate on Sunday took two more steps toward passing a $1 trillion bipartisan infrastructure bill by blessing the details of the largest U.S. investment in roads and bridges in decades and by moving to limit debate on the overall measure.

In a 69-28 vote, 19 Republicans joined 48 Democrats and two independents to support the provisions of a compromise that was the result of painstaking negotiations by a group of Republicans and Democrats.

The Senate also voted 68-29 to limit debate on the overall bill, which could put it on track for a vote on passage sometime Monday or Tuesday, and, in turn, send it to the House of Representatives.

The legislation is a top priority for Democratic President Joe Biden. Its passage, which remains likely after a large Senate majority has repeatedly voted to advance it, would be a major victory for him and the bipartisan lawmakers who crafted it.

Both the Senate and House are narrowly controlled by the Democrats.

House Speaker Nancy Pelosi has said she would only bring the bill to a vote after the Senate passes a separate $3.5 trillion bill providing funding to fight climate change and address home healthcare, which Democrats aim to push through without Republican votes, using a maneuver called “reconciliation.”

Sunday’s votes were delayed until the evening by the opposition of a single senator, freshman Bill Hagerty, using parliamentary rules that require all 100 senators to consent to expedite the process.

Hagerty, former President Donald Trump’s ambassador to Japan, objects to the legislation because of its projected increase to the federal budget deficit.

He announced his opposition last week after the nonpartisan Congressional Budget Office said the legislation would increase deficits by $256 billion over 10 years.

The CBO analysis did not include $57 billion in revenue that Washington could collect over the long term from the economic growth benefits of infrastructure projects. It also did not count $53 billion in unused federal funds to be returned from states.

Despite the frustration of lawmakers from both parties at the bill’s slow progress, Democrats believe the legislation will ultimately pass.

“At the end of the day, this legislation is too important not to pass. Too important. Failure, as they say, is not an option,” Senator Tom Carper, Democratic floor manager for the bill, told reporters.