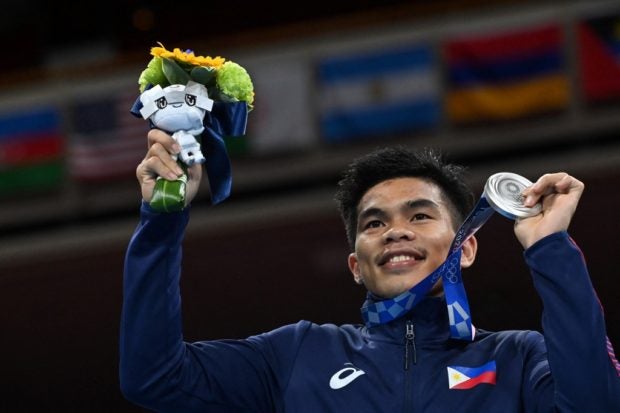 Philippines’ Carlo Paalam celebrates his silver medal during the medal ceremony for the men’s fly (48-52kg) boxing final bout during the Tokyo 2020 Olympic Games at the Kokugikan Arena in Tokyo on August 7, 2021. (Photo by Luis ROBAYO / POOL / AFP)

“The entire Filipino nation is very proud of the silver medal finish of Carlo Paalam in the Men’s Flyweight Boxing Competition in Tokyo,” presidential spokesperson Harry Roque said in a statement on Saturday.

The Palace official hoped that Paalam’s performance would be an inspiration to younger Filipinos.

“Carlo’s road to the Olympics is the story of Filipinos – one filled with perseverance, sacrifice, and hard work.  May Carlo’s performance further serves as an inspiration to the young generation of Filipinos,” he said.

Paalam clinched a silver medal in his fight with Britain’s Galal Yafai.

Roque said the Palace is “grateful” to Filipino athletes who joined in the prestigious sporting event for representing the country.

“We are grateful to all the Filipino athletes who participated in the Tokyo Olympics for showcasing their world-class talent, representing the country and uplifting the spirit of our people in these trying times of COVID-19. We thank you for giving the Philippines its best Olympic performance in history,” he said.

The Philippines ended its Olympic campaign with one gold medal, two silver medals, and one bronze medal.

A former scavenger, Carlo Paalam steps into biggest fight of his life