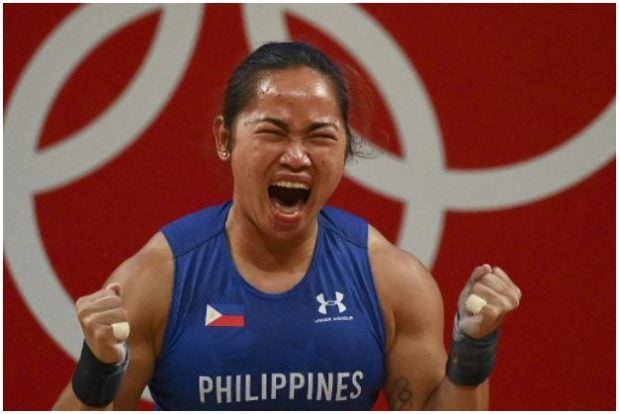 Philippines’ Hidilyn Diaz reacts after placing first in the women’s 55kg weightlifting competition during the Tokyo 2020 Olympic Games at the Tokyo International Forum in Tokyo on July 26, 2021. (Photo by Vincenzo Pinto / AFP)

MANILA, Philippines — Aside from the cash incentives and a condo unit, Olympic weightlifter Hidilyn Diaz may now also count among her many haul a brand-new car following her historic gold medal win at the 2020 Tokyo Olympics.

As seen in photos shared by the Ayala Foundation, Diaz was quick to try her brand-new car as she took it for a spin.

“The golden girl gets her golden car! Hidilyn Diaz takes her brand-new Kia Stonic for a test drive,” the Ayala Foundation said in a Facebook post.

The golden girl gets her golden car! 🥇 Hidilyn Diaz takes her brand-new Kia Stonic for a test drive.Watch out for…

The weightlifter received the car after being recognized by the Ayala Foundation as an ‘Atletang Magiting’ following her victorious Olympic gold stint. The car was pledged by AC Motors and Kia Philippines.

Aside from the vehicle, the Olympic champion also received P10 million from the MVP Sports Foundation, as well as another P3 million from 1Pacman party-list Rep. Mikee Romero.

Diaz is also still set to receive several other cash and non-cash incentives from the government as well as the private sector.

This includes the P10 million under Republic Act 10699 or National Athletes and Coaches Benefits and Incentives Act, another P10 million from the San Miguel Corporation, and P2.5 million from her hometown of Zamboanga City, among others.

Diaz will also receive two houses and lots and a condominium unit, and free lifetime flights from AirAsia and the Philippine Airlines, among other non-cash incentives.

In her fourth straight Olympics, Diaz delivered the Philippines’ breakthrough gold medal after conquering the women’s 55 kilograms weightlifting competition at the Tokyo Olympics, and a total weight of 224 kgs to clinch the championship.