Prices of Benguet veggies soar due to monsoon rains 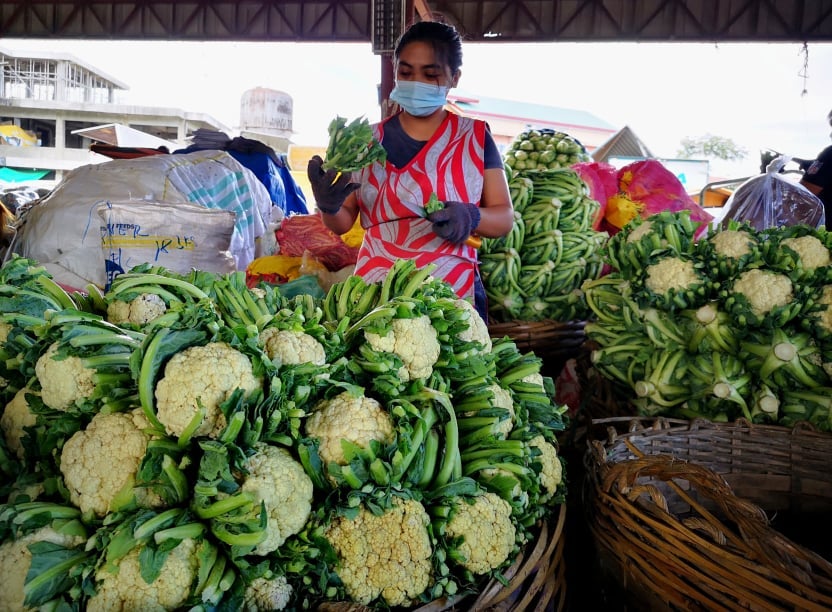 SLOWER DAYS In this photo taken in October 2020, a stall owner at Vegetable Trading Post in La Trinidad, Benguet, sorts newly harvested cauliflowers before these are sold. Prices of Benguet vegetables are increasing as farmers and traders suffer from the impact of heavy monsoon rains disrupting supply and delivery. —EV ESPIRITU

BAGUIO CITY—Prices of highland vegetables coming from Benguet province and nearby areas have gone up due to the sustained monsoon rains experienced in north Luzon, authorities said on Thursday.

Agot Balanoy, spokesperson for the league of vendors’ associations at Vegetable Trading Post in the Benguet capital of La Trinidad, said the drop in supply and difficulty in transporting vegetables from farms had pushed the prices by as much as P45 a kilo.

Benguet supplies 80 percent of the country’s salad vegetables, such as carrots, cabbages, cauliflower, green beans and lettuce, which are packed in the province’s major trading posts.

Prior to the monsoon season, homegrown vegetables were sold below the cost of production due to the drop in demand owing to the pandemic.

But the incessant rains in the past two weeks have damaged crops and roads in several areas in the Cordillera, resulting in the price hike.

“Vegetable farmers are having a hard time transporting their produce due to the landslides that destroyed farm-to-market roads and [sections of] some highways,” Balanoy told the Inquirer.

In Tublay town, about 1. 5 tons of rotten potatoes were dumped by the roadside in Barangay Ambassador on Tuesday after a farmer in Bakun town failed to deliver the produce to the market due to the torrential rains.

According to the Department of Agriculture (DA) in the Cordillera, the heavy downpour has been affecting the mobility of farmers and vegetable traders “given the rugged and fragile landscape of the region.”

“Potatoes can be stocked for weeks when dry but are prone to rotting when kept wet and not allowed to air dry properly, especially during the rainy season,” the DA said in a statement on Wednesday.

According to the DA, no buyers were willing to buy these potatoes because these had already developed visible signs of rotting.

Balanoy said the enhanced community quarantine (ECQ), the status with the strictest form of restrictions, imposed on Metro Manila would aggravate the transportation problems for vegetable traders due to the travel restrictions

Starting on Friday, longer curfew hours, from 8 p.m. to 4 a.m., would be enforced in Metro Manila while under ECQ.

“The curfew period in the National Capital Region will shorten its market hours and will result in a further decline in demand and additional woes for the farmers,” Balanoy said.

According to records from the Benguet agriculture office, the prolonged monsoon rains have caused an initial P4.8 million worth of damage to 51.3 hectares of vegetable farms in the province, mostly in the towns of Kapangan, Sablan, Itogon and Bokod.