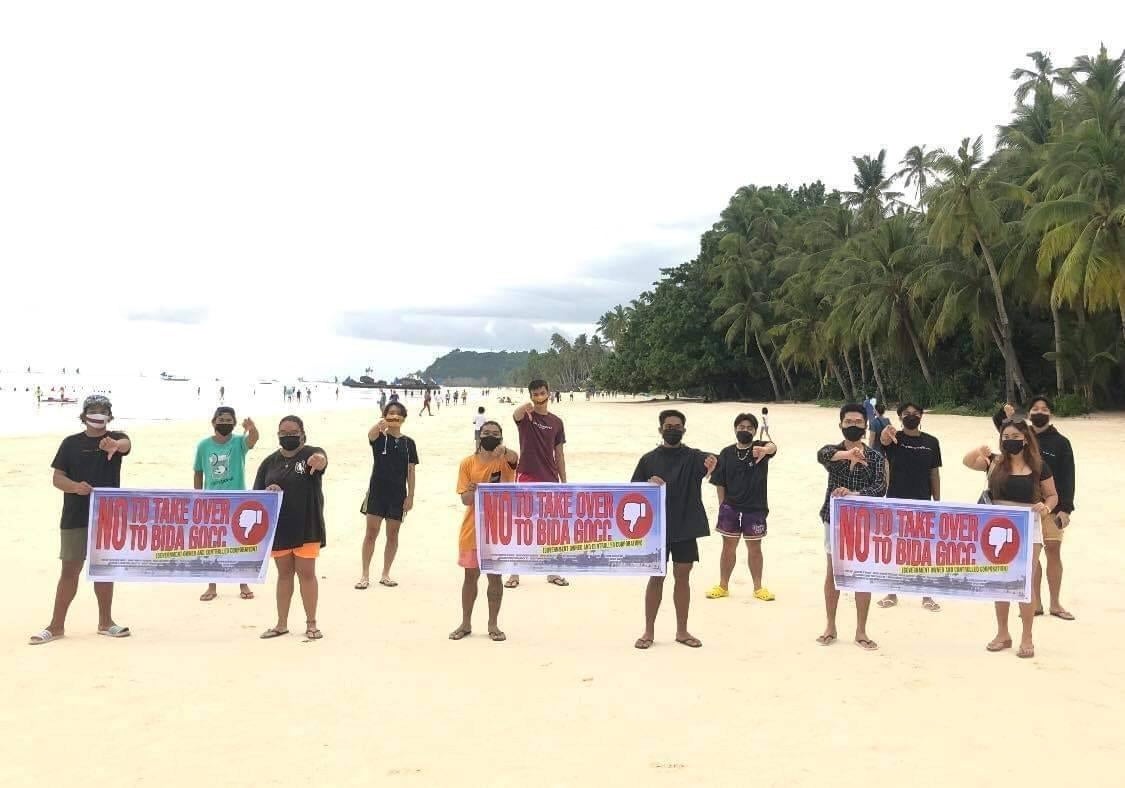 ISLAND VOICE Residents of Boracay are opposing a bill that will allow a government-owned and -controlled corporation to manage the resort island in Malay town, Aklan province. —PHOTO FROM ONE BORACAY MOVEMENT FACEBOOK PAGE

ILOILO CITY—The House of Representatives on Wednesday passed on second reading a controversial bill that provides for the creation of a government-owned and -controlled corporation (GOCC) that would manage Boracay despite continuing opposition from local officials, national government agencies and different groups on the resort island in Malay, Aklan.

House Deputy Minority Leader and Bayan Muna Rep. Carlos Zarate, who is opposing the bill, said the creation of the Boracay Island Development Authority (Bida) as a corporate body would be detrimental to small business operators and island residents.

House Bill No. 9826, which consolidated and substituted at least nine similar bills, provides for the creation of the Bida as a GOCC with corporate powers that will formulate the Boracay Action Plan.

Under the bill, the Bida has the power to “contract, lease, buy, sell, acquire, own, or dispose … real property of whatever nature.”

Zarate, in an online manifestation during the session, said residents and other groups in Boracay were already apprehensive about the real purpose for the island’s six-month closure in 2018 purportedly for rehabilitation.

“Many sectors fear that there is a plan to further open Boracay for control of big businesses and foreign investors,” he said, noting the bill creating a Bida will put small business owners and indigenous peoples at a disadvantage.

He said the Bida would also trample on the rights and mandate of the local governments of Aklan province and Malay town.

The Aklan provincial board and the municipal councils of Malay and other towns have passed resolutions opposing a GOCC-type Bida.

They have supported the creation of a multiagency regulatory body similar to the Boracay Inter-Agency Task Force (BIATF).

The Bida is intended to replace the BIATF, which has been supervising the rehabilitation activities on the island since April 2018.

The BIATF is also opposing the GOCC-type Bida. According to agencies under the BIATF, the substitute bill also provides for the creation of a special economic and tourism zone that will include Boracay. It also empowers the Bida to undertake reclamation projects.

“The problem of Boracay is one of overdevelopment and overtourism. The carrying capacity study conducted in 2018 showed exceedance in the island’s physical carrying capacity in terms of the number of areas covered by the structures, including hotels and resorts, residential and other commercial establishments,” the Boracay Inter-Agency Rehabilitation Management Group, which oversees the operation of the BIATF, said in a position paper.

Among the controversial provisions of the consolidated bill objected to by Aklan officials were those that would grant the Bida power to issue business licenses and building permits and to set a limit to real property taxes that the local government could collect.