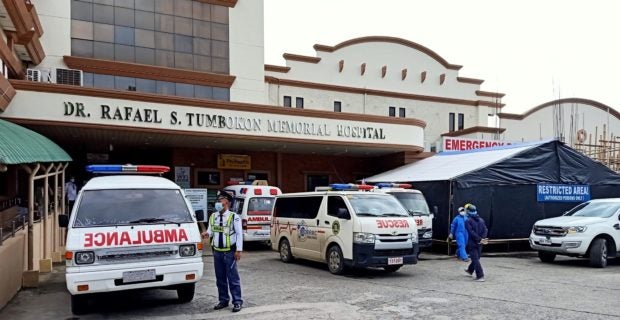 STREAMOF PATIENTS Ambulances carryingCOVID-19 patients continue to arrive at the Aklan provincial hospital in the capital town of Kalibo amid a surge of cases and rising deaths in the province. —PHOTO COURTESY OF MERES MASANGYA

ILOILO CITY—Local governments on Panay Island are scrambling to prepare burial grounds for those who died of COVID-19 after the lone crematorium on the island stopped receiving cadavers from outside of this city.

The crematorium stopped accepting cadavers from outside the city after it was overwhelmed by the number of cadavers, mostly from other provinces in Panay, including many who died due to COVID-19. The island is composed of the provinces of Iloilo, Aklan, Capiz and Antique.

Treñas said the funeral home’s crematory has been running at its full capacity of 30 cadavers daily.

He said that under health protocols, those who died from the disease could not be buried in the city because of the low ground level, which may lead to contamination of groundwater.

“We are hoping for the clarification and assistance of (the Department of Health, or DOH) as our crematorium cannot handle the number of cadavers arriving from all parts of Panay,” Treñas said in a statement on Wednesday.

In Cebu City, at least six of its 26 cemeteries had reached full capacity after there was a rise in the number of deaths last month, said City Councilor David Tumulak on Wednesday.

Those who ran out of available burial chambers and niches were among the city’s biggest cemeteries—Calamba Cemetery, Pardo Roman Catholic Cemetery, Queen City Memorial Garden, and the Municipal and Veterans cemeteries.

In July 2020, the Cebu City government planned to create a city-owned cemetery amid the surge of COVID-19. But the plan was shelved after the number of deaths in the city went down in September last year, said Tumulak, the proponent of an ordinance creating a new cemetery in the city.

As of Aug. 3, 952 persons died of COVID-19 in Cebu City since the pandemic struck last year.

The city currently has over 3,000 active cases, with most hospitals getting swamped with patients.

Aklan Gov. Florencio Miraflores on Tuesday advised mayors of the 17 towns in the province to prepare burial grounds for residents who died due to COVID-19 since they could no longer be cremated in Iloilo City.The DOH in Western Visayas reported 166 COVID-19 related deaths in the region from July 20 to Aug. 2.

Dr. Jessie Glen Alonsabe, Western Visayas epidemiologist, said cadavers that could not be cremated had to be buried within 24 hours based on provisions of the Sanitation Code on the disposal of bodies of those who died from infectious diseases.

Alonsabe said all COVID-19 variants, including the more infectious Delta variant, were in the region and could be the cause of the increasing number of cases.

Aklan, which is under the modified enhanced community quarantine (MECQ) from Aug. 1 to Aug. 15, has a positivity rate of from 40 percent to 50 percent, with about half of the total number of persons tested were infected with COVID-19.

The Aklan Medical Society earlier said an average of 147 new COVID-19 cases and two to three deaths in the province were recorded daily from July 18 to July 24 due to a surge in cases. As the number of cases increased, COVID-19 hospital beds in Aklan have also become scarcer with the utilization rate reaching 91.84 percent. At Dr. Rafael S. Tumbokon Memorial Hospital, the provincial hospital in the capital town of Kalibo, a continuous stream of patients who tested positive for the disease have been arriving, with many waiting in line for hospital beds.

Business operators in Aklan mainland and on Boracay Island have called on the government to beef up the province’s health and medical resources while Aklan is under MECQ.

“We hope that the next several weeks are strongly used to control the outbreak, increase medical care capacity and supplies, increase efforts and support for vaccination drives, and prepare for reopening…,” the Philippine Chamber of Commerce and Industry-Boracay said in a statement.

Boracay has again stopped accepting tourists due to heightened restrictions with restaurants and most hotels stopping operations.