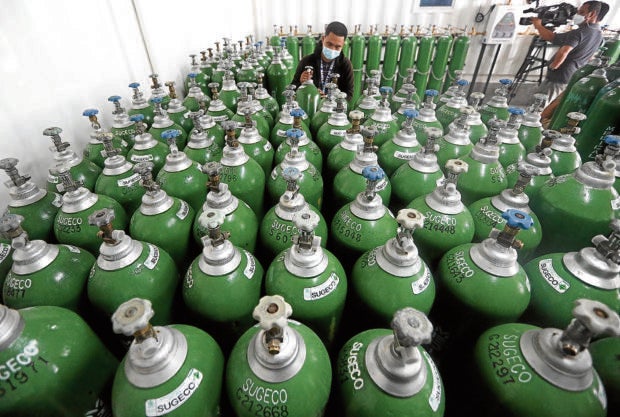 FULL TANK As Metro Manila braces for the surge of COVID-19 cases, the Manila COVID-19 Field Hospital in Rizal Park gets ready with hundreds of oxygen tanks for good measure. —MARIANNE BERMUDEZ

MANILA, Philippines — Trade Secretary Ramon Lopez claimed the local supply for oxygen tanks is still about three times more than the current demand, but based this claim on data before the number of daily cases increased amid the highly contagious COVID-19 Delta variant.

“Current industry capacity is about three times more the current demand. There is a surplus from the producers’ side,” Lopez said after Cebu City officials claimed oxygen was being hoarded amid a surge in COVID-19 cases in the city.

“The current capacity surplus includes both the medical and industrial oxygen capacity, and the latter can also be allocated to produce medical oxygen if and when necessary,” he added, later sending reporters a presentation based on an average of 5,000 new COVID-19 cases a day.

But even if there were profiteering, Justice Secretary Menardo Guevarra said on Wednesday that he would direct the National Bureau of Investigation to probe and prosecute those responsible.

“As there are current reports of hoarding, and possibly overpricing, of oxygen tanks and other medical supplies in Cebu, which probably involve a large number of suppliers, I will direct the NBI to help the Philippine National Police and DTI (Department of Trade and Industry) in running after and prosecuting these hoarders,” Guevarra told reporters.

He added that the NBI probe will cover not only Cebu City but all areas of the country where incidents of COVID-19 Delta variant infection are expected to be high.