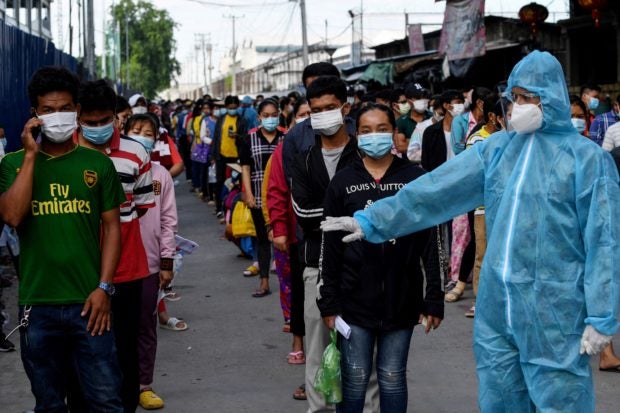 An official in personal protective equipment (PPE) manages the crowd as people queue to receive China’s Sinopharm Covid-19 coronavirus vaccine in Phnom Penh on May 31, 2021, as part of the government’s campaign to halt the rising number of cases of the virus. AFP

PHNOM PENH — The Kingdom of Cambodia has so far detected more than 200 cases of the highly contagious Delta variant.

The Ministry of Health has expressed deep concerns that the variant may have already reached communities and may be spreading as some of the cases detected had no clear source of origin.

It said that of the latest 109 Delta cases, 66 were confirmed by the Institut Pasteur du Cambodge on Aug 1 and 43 on July 31. Most of these cases were found in migrant workers returning from Thailand.

The 66 cases were detected in the capital and a number of provinces – four in Phnom Penh; 19 in Siem Reap; 21 in Oddar Meanchey; three in Banteay Meanchey; 15 in Pailin; and one each in Kampong Cham, Tbong Khmum, Kampong Thom and Battambang.

They included 51 migrant workers, nine health workers and one passenger traveling from Malaysia.

The 43 cases recorded on July 31 were all migrant workers.

Among the 109 cases, the ministry noted that some were found in the community without a clear source of origins.

Three out of four cases in Phnom Penh involved an obstetric patient at Calmette Hospital, a cleaner and a patient who came for emergency services at Khmer-Soviet Friendship Hospital.

In Kampong Cham, a single Delta case was found in Cheung Prey district’s Skun commune – also without any clear source.

In Oddar Meanchey, the 21 Delta cases pose a greater threat as the virus may have already reached large-scale community transmission there.

According to the ministry’s press release, 12 out of the 21 cases were migrant workers while the other nine were medical workers.

“The 12 migrant workers may have been in contact with local merchants in the community,” it said.Health ministry spokesperson Or Vandine confirmed on Monday that there had been a total of 223 confirmed Delta cases in Cambodia since March 31.

“The numbers we have indicate that the Delta variant has been spreading in our community. The ministry insists that the public remain vigilant in practising protective measures,” the ministry said.

In Phnom Penh, the Delta variant has already spread in a part of Tuol Kork district’s Boeung Salang commune, prompting municipal governor Khuong Sreng to impose a lockdown there.

A lockdown was also imposed on some parts in Russey Keo district after some residents were suspected to have had contacts with infected patients.

The lockdown will last for 14 days through Aug 16.