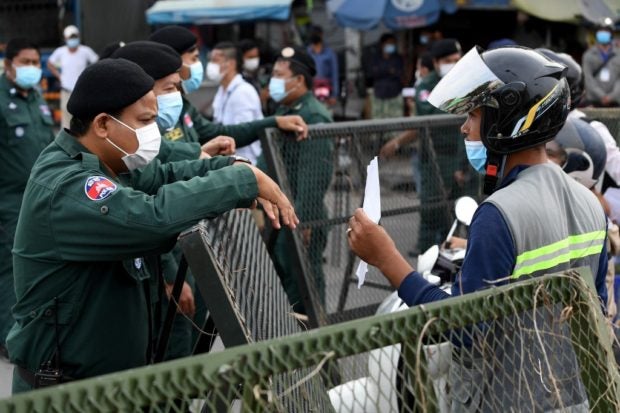 Police block motorists from passing a checkpoint set up in capital Phnom Penh and neighboring Ta Khmao town and Kandal province, as Cambodia’s Prime Minister Hun Sen warned that the country was on the brink of death amid worst virus outbreak, in Phnom Penh on April 15, 2021. Photo by TANG CHHIN Sothy / AFP

PHNOM PENH — Spiraling Covid-19 cases have put Cambodia “on the brink of death”, its strongman premier Hun Sen has warned, as the country imposed lockdowns in the capital Phnom Penh and a nearby city.

The Southeast Asian kingdom has seen Covid-19 cases surge since February, when an outbreak was first detected among its Chinese expatriate community.

Authorities said last week that hospitals in Phnom Penh were running out of beds and that they had transformed schools and wedding party halls into treatment centres, while Hun Sen threatened quarantine-breakers with jail time.

Phnom Penh and adjacent city Ta Khmau were Wednesday night placed under lockdown for two weeks to curb the spread, effectively halting the movement of more than two million people.

“We are on the brink of death already,” he said. “If we don’t join hands together, we will head to real death.”

Cambodia’s latest announced figures exceeded 4,800, but the premier said Wednesday that an additional 300 cases had been detected.

Phnom Penh and Ta Khmau residents are now barred from leaving their homes for two weeks except to go to the hospital or to buy medicine, while only two household members will be allowed out to buy food.

On Thursday morning, police blocked motorists from passing a checkpoint set up at the border between the two cities, with residents showing their ID cards hoping to pass through.

Blockades were also erected around the major Norodom Boulevard around the iconic Independence Monument to prevent people from traveling.

While the kingdom has seen improvements in its healthcare in the past decade, its infrastructure — especially in rural areas — is still poor, with a lack of services and qualified doctors.

Inequality also plagues the system, with reports of lower income families being turned away from hospitals.

Before the community outbreak was detected in February, Cambodia’s Covid-19 toll was comparatively lower than its regional neighbors — but experts had chalked it up to the lack of widespread testing.