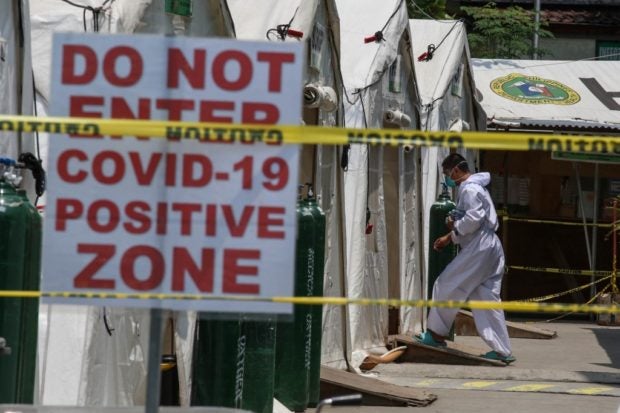 Photo taken April 6 shows a man wearing protective equipment walk into a makeshift ward for COVID patients at a Manila hospital More contagious variants had been blamed for a record surge in infections in Metro Manila. FILE PHOTO/AFP

This was how presidential spokesperson Harry Roque described the Duterte administration’s COVID-19 response last March, a year after the pandemic reached Philippine shores initially through two Chinese tourists from Wuhan, a Chinese city where SARS Cov2, the virus that causes the disease, originated.

Weeks after Roque made the declaration, however, the Philippines registered 15,310 new cases, the highest single-day increase in infections.

The rate of increase in COVID cases at that time was considered serious enough to prompt the government to impose stricter lockdowns in Metro Manila and the provinces of Bulacan, Cavite, Laguna, and Rizal starting March 29.

The independent COVID monitoring group OCTA Research, however, said that while localized lockdowns may work against “variant-driven” increases, restrictions become more effective if imposed along with expanded testing, contact tracing and supported isolation.

According to data from the Department of Health (DOH), a 21.6 percent weekly positivity rate was reported last March 28 when 70,902 tested positive for coronavirus out of 327,748 total individuals tested for the week.

A week after the enhanced community quarantine (ECQ) was lifted, the weekly positivity rate was 16.7 percent last April 18 or 70,408 positive out of 384,086 tested. 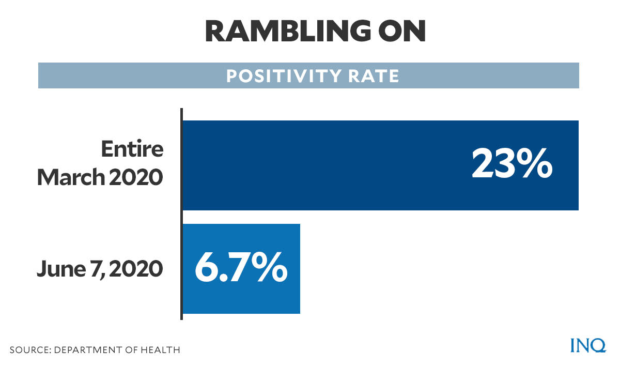 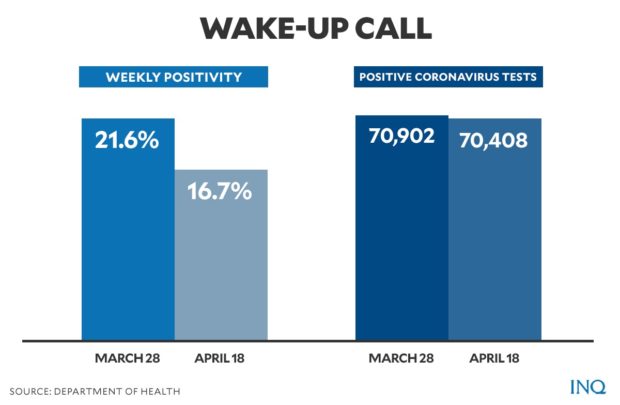 While lockdowns greatly contribute to mitigating the spread of COVID-19, the Coalition for People’s Right to Health (CPRH) said that the government should also escalate “testing and tracing efforts” to “break the chain of transmission.”

The group said that in the Philippines, the positivity rate per week has been over 5 percent since December 2020 and has not declined to less than 10 percent since March 2021.

The group emphasized that coronavirus tests have been stagnant at 40,000 to 50,000 per day and that the national average of contact tracing is “one is to six.” 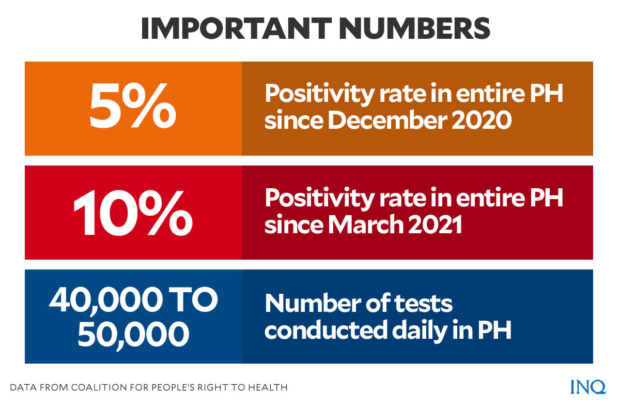 “Since the surge last March 2021, cases have not decreased to less than 3,000 to 4,000 cases per day and it’s weird that in the Philippines, thousands of cases per day seemed to be normal when in other countries, the real concept of normal is having no COVID-19 case or at least an increase of a hundred per day,” said Dr. Joshua San Pedro, co-convenor of CPRH.

Recently, when the government kept boasting of “record high” vaccine injections—659,029 doses last July 27—the administration listened to experts and announced another round of lockdown, or ECQ, to start on Aug. 6 until Aug. 20. It was to prepare for Delta, a SARS Cov2 variant first found in India, and a surge in cases expected from it.

However, the CPRH said that while inoculation against SARS Cov2 is essential, it was not enough to fight the virus if not done alongside enabling, proactive and grounded response to the health crisis.

The group said the response it was referring to should involve the following:

• Free testing and medication for the infected
• Fast and intensified contact tracing and genomic surveillance
• Broad and fast inoculation efforts
• Aid for all Filipinos, especially individuals in isolation
• Strengthening the health system

Data from the DOH said that last July 27, the day a record-high total of vaccine doses were administered, the Philippines reported 7,186 new COVID-19 cases, the highest single-day increase in over six weeks.

San Pedro, pointing to the government’s inclination to believe that inoculation and lockdown are the “only way out” of the health crisis, said it was also essential to take a closer look at how many individuals are getting sick.

“At the end of the day, we should look at those infected by the virus. The fact is there are thousands of cases in the Philippines so it really reflects on the basic level of testing,” he said.

“It’s very hard because [without enough testing], even if we reach our vaccination target, COVID-19 cases will continue to rise,” added San Pedro.

A recent release from OCTA Research said Metro Manila’s 7-day average of new cases increased by 40 percent to 1,279 compared to 913 last week, saying that the growth rate suggested the possibility of community transmission of the Delta variant, which the US Centers for Disease Control and Prevention (CDC) said was as contagious as chickenpox.

The group also said that in Metro Manila, the number of people that one COVID-19 positive case can infect increased to 1.52 from 1.29 last week.

The Filipino Nurses United shared the sentiments of San Pedro, saying that what the government has been doing since the beginning of the COVID-19 catastrophe is not enough.

“After more than one year of raging pandemic, the nurses and other health care workers have suffered much from the inadequacies and severe deficiencies of the government pandemic response,” said Jocelyn Andamo, the group’s secretary general.

The failure of containing the pandemic has caused overwhelming workload and tremendous risk for the health and lives of care providers “while their rights and welfare have continuously been hardly upheld and ensured,” she added.

Andamo said despite medical workers’ “long-standing” recommendation for the government to “hire nurses en masse,” there has been a reduction in health care workforce instead.

She said that the Health Human Resource Development Bureau of the DOH stated that with the national health budget cut in 2021, the number of deployed nurses was reduced by 12 percent or 2,319 slots for nurses.

San Pedro said that with failures in the health care system, inconsistencies in vaccination efforts became clear, asserting that until now, inoculation remains “slow and insufficient.”

“We have a record-high per day, but there are also times that it decreases because of lack of supply. Likewise, vaccines remain inaccessible for several individuals,” he said.

According to him, the government failed in dealing with the COVID-19 health crisis and that it’s “unfair” to always blame Filipinos for the increases in cases as did President Rodrigo Duterte in his previous televised briefings during which he threatened people violating health protocols with arrest and detention.

“The government deflects from who is really responsible for the COVID-19 response. It should realize that its response should be proactive and enabling,” said San Pedro.