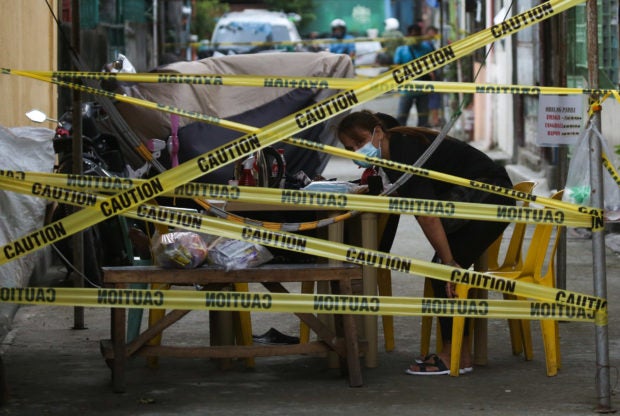 At least 167,000 workers in Metro Manila would be affected by the two-week lockdown starting Aug. 6, according to data from the Department of Labor and Employment (Dole).

During an enhanced community quarantine (ECQ), only essential industries such as hospitals and food and drug manufacturers are allowed to operate at full capacity, which means many daily wage earners in nonessential sectors, such as those in leisure and entertainment, would have reduced or no income for two weeks.

Public transportation, however, is expected to continue operating during the ECQ, according to Malacañang.

Since the start of the year, 152,987 workers in Metro Manila have been laid off, or an average of 21,800 workers a month, based on reports to the Dole’s Bureau of Local Employment.

Some 127,300 workers in Metro Manila have also been on reduced workdays under “flexible work arrangement” schemes, or an average of 18,100 workers a month who suffered a salary cut.

“Aside from those who will permanently lose their jobs, those who are under flexible work arrangement are also worried,” Assistant Labor Secretary Dominique Tutay said in a briefing on Monday.

In March, when Metro Manila was under a lockdown, 27,109 workers were laid off. Another 21,873 workers were retrenched the following month.

Out of the 152,987 laid off workers in the capital region since January, a third or 57,362 were construction workers; 19,706 in accommodation and food services; 10,163 in the information and communication sector, and 10,063 in wholesale and retail trade and repair of motor vehicles and motorcycles.

Tutay estimated that 30,000 to 40,000 workers in Metro Manila might be laid off due to the coming lockdown.

The labor department, however, has no more cash assistance to offer the workers to be displaced.

“Bayanihan 2 has technically ended June 30 of this year and therefore we have no more legal basis to give ‘ayuda’ except using our Tupad funds,” Tutay said.

Malacañang, on the other hand, assured eligible Metro Manila residents on Monday that they would receive financial assistance during the two-week ECQ, although the country’s budget officials were still looking for sources of funding.

Presidential spokesperson Harry Roque said the assistance would amount to P1,000 per individual, but each family could receive a maximum of only P4,000.

Metro Manila residents would get the same amount provided to residents of Cagayan de Oro City, Iloilo province, Iloilo City and Gingoog City, which were earlier placed under ECQ, he said.

“This will surely be provided. What is not certain is where we will get the amount,” he said.

Officials of the Department of Budget and Management were set to meet on Monday afternoon to identify the funding sources, he added.

Roque also appealed to residents to cooperate during the Aug. 6 to 20 lockdown to curb coronavirus infections.

He called on heads of households to impose a “family lockdown” to ensure that their members would only go out to get food and medicine and remain at home as much as possible to reduce their risk of getting infected.

“Let’s not rely on ECQs. Family lockdown is the solution,” he said.

The government should also extend ayuda to informal waste workers or scrap collectors who would be among the displaced during the lockdown, according to groups representing the informal waste sector in Metro Manila and an environment and health watchdog.

EcoWaste Coalition on Monday said the ECQ should be matched with a well-timed provision of assistance in cash and in kind that would put enough food on the table of informal workers, especially those earning daily wages.

“Our plea is for the government to give us something to eat daily, because we will not have a source of livelihood if we would not be allowed to go out and sort scrap materials,” said Ronaldo Sarmiento of the Samahan ng mga Mangangalakal ng Scrap sa Capulong, based in Tondo, Manila.

The two-week ECQ would be just like March 2020 all over again for Metro Manila residents as quarantine passes would be required in public places, the Metropolitan Manila Development Authority (MMDA) said on Monday.

MMDA chief Benhur Abalos said that it would be up to local governments whether they would issue new quarantine passes in the next three days or if residents would be allowed to use their old permits.

He added that longer unified curfew hours—8 p.m. to 4 a.m.—would be implemented in the metropolis from Aug. 6 to Aug. 20.

In San Juan, Mayor Francis Zamora said they have printed 40,000 new quarantine passes that would be valid starting on Friday.

Last year, nearly all cities in Metro Manila also implemented a liquor ban, but for the coming ECQ, this would again depend on the mayors.

Secretary Eduardo Año of the Department of the Interior and Local Government (DILG) said on Monday that he was amenable to the idea of conducting 24/7 vaccination in Metro Manila to complete the daily target of 250,000 persons during the two-week ECQ (See related story on Page A2).

In an interview at CNN Philippines, Año said they would employ additional law enforcement officers in vaccination sites, including personnel from the Bureau of Fire Protection.

As for proposals to make house-to-house vaccinations, DILG spokesperson Jonathan Malaya said that it was “not viable” for everyone.

Malaya said house-to-house or home vaccination was only for bedridden or sick residents.

“It’s ideal but very difficult to do,” he said.

—WITH A REPORT FROM JHESSET O. ENANO INQ