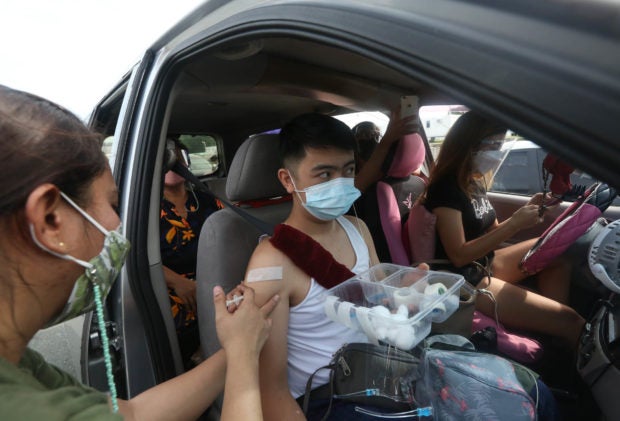 JAB IN A CAR: A family avails itself of the drive-thru vaccination offered by the City of Manila at Quirino Grandstand on Saturday. (Photo by MARIANNE BERMUDEZ / Philippine Daily Inquirer)

MANILA, Philippines — The government is opening its vaccination drive to anyone, 18 years and older, in the National Capital Region (NCR) during the two-week lockdown starting Aug. 6 to achieve a wider coverage of Metro Manila’s population.

However, the Department of Health (DOH) said that “walk-in,” or those who were not preregistered, would not be allowed to prevent people from crowding vaccination sites in the capital.

The DOH also appealed to local governments to still prioritize the elderly and those with underlying health conditions, who were at higher risk of succumbing to the disease.

Health Undersecretary Myrna Cabotaje, also chief of the National Vaccination Operations Center, on Monday said they started distributing Pfizer doses. She said hundreds of thousands of AstraZeneca, Moderna, Sinovac and Pfizer vaccines to be delivered this week would be deployed to NCR by Aug. 9.

Cabotaje, in a Viber message, said the full deployment of the four million doses promised to Metro Manila mayors would have to be completed by Aug. 16.

The local executives earlier agreed to a lockdown on condition that the national government would provide cash subsidies and four million vaccine doses to NCR.

In Malacañang, presidential spokesperson Harry Roque said on Monday that Metro Manila was assured of getting at least 2.5 million vaccine doses during the lockdown.

He said Secretary Carlito Galvez Jr., the official overseeing the government’s vaccine procurement, would try to see if he could increase this to four million doses.

More than 9.1 million Filipinos were now fully protected after the government narrowed the gap between the number of first and second doses administered.

The government said the three million increase in the number of fully vaccinated individuals was largely attributed to the rollout of the single-dose Janssen manufactured by Johnson & Johnson and the government’s effort to push its local counterparts to catch up with the second-dose vaccination.

Boosting the vaccination program is crucial as the number of active cases was forecast to surge to 525,000 on or before Sept. 26 if NCR remained under the least restrictive general community quarantine, according to Roque, citing projections made by the experts of the Feasibility Analysis of Syndromic Surveillance.

The number of cases has actually been rising in the past weeks, prompting calls for stricter quarantine in NCR.

It said 77 more people have died from the disease. Total deaths now stood at 28,093.

The DOH said 15.7 percent of the 50,601 people tested on July 31 were positive for the virus. Three laboratories did not submit their data.

The city of Manila is taking the lead in ramping up the inoculation drive by conducting a 24-hour vaccination during the two-week enhanced community quarantine (ECQ), according to Mayor Francisco “Isko Moreno” Domagoso.

The city government also issued on Monday a call to medical professionals for free services as vaccinators in the 24-hour vaccine drive.

Manila likewise opened its drive-through vaccination at Quirino Grandstand in Luneta during the weekend.

In Congress, a lawmaker on Monday called on the government to allocate more vaccines to provinces around Metro Manila that were also placed under a stricter lockdown.

Rizal Rep. Fidel Nograles said the return to normalcy of the nation’s economic center would be faster if the government would include the cities and towns surrounding Metro Manila in its vaccine priority.

In a separate statement, Albay Rep. Joey Salceda, chair of the House ways and means committee, said the more infectious Delta variant could only be stopped through testing and vaccination.

Salceda said that “while lockdowns can be tactical, our strategy with the Delta variant will involve mass testing, faster turnaround of test results, and faster vaccination.”

Ang Probinsyano Rep. Ronnie Ong agreed that no amount of lockdown could stop the spread of COVID-19 if the government would not be equipped with the tools to quickly identify potential virus carriers.

In a statement, Ong lamented the failure of the Department of Information and Communications Technology to establish a national contact tracing portal and vaccination database, which could have provided a real-time verification of fully vaccinated individuals and give the government a fast and reliable contact tracing tool.