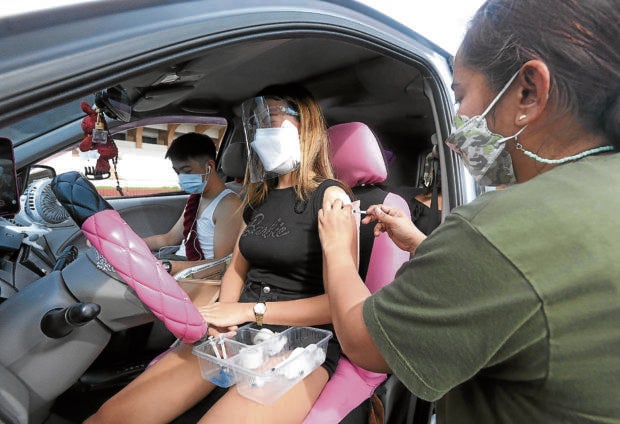 DRIVE-THRU: People get inoculated with Covid19 vaccine inside their cars at a drive-thru vaccination for 4-wheel vehicles at the Quirino Grandstand in Manila on Saturday, July 31, 2021 as the NCR shifts back to ECQ from Aug. 6 to 21 due to the rising cases of Delta variant virus.
(MARIANNE BERMUDEZ / Philippine Daily Inquirer)

MANILA, Philippines — Independent monitoring group OCTA Research has emphasized that latest indicators showed that a community transmission of the Delta variant could already be happening in Metro Manila, a situation that the health department refused to acknowledge but told the public to prepare for.

In a report on Sunday, OCTA described the National Capital Region (NCR) as being under a “serious surge” after logging 1,740 COVID cases on July 31—the highest count since May 10 when it was under modified enhanced community quarantine (MECQ).

NCR will be under enhanced community quarantine (ECQ), the strictest lockdown category, from Aug. 6 to Aug. 20 as infections continued to rise following the detection of local Delta cases.

“The rapid growth rate [of cases] suggests the possibility of community transmission of the Delta variant in the NCR,” OCTA said.

By the World Health Organization (WHO) definition, a community transmission referred to large but unrelated clusters of infections, as opposed to a local transmission wherein cases were linkable to one another.

OCTA said NCR’s seven-day average of cases (from July 25 to July 31) was a 40-percent increase from the previous week’s.

The reproduction number also rose from 1.29 to 1.52. This is the average number of people that one infected person will pass on the virus to.

Comparing the numbers from the last two weeks, hospital bed occupancy went up to 45 percent from 38 percent and the use of intensive care units (ICU) to more than half of capacity, or 52 percent from 45 percent.

It was based on these metrics that OCTA classified all cities in Metro Manila as high-risk areas, except for Pasay, Taguig, Mandaluyong and Manila, which remained at moderate risk.

The Philippine General Hospital (PGH) on Sunday also issued a hospital alert, the second time since July after the detection of the Delta strain in the country.

Patient admissions to PGH, a major COVID-19 referral facility, was also on the rise at 133 as of July 31, from less than a hundred in the previous weeks. This number, however, was still far from the admission rate during the surge early this year of more than 200.

PGH spokesperson Dr. Jonas del Rosario said PGH has retained a 250 COVID-19 bed capacity. “We can’t expand further since we have many non-COVID patients,” he said in an earlier interview.

“For your information, all patients admitted to our ICU are unvaccinated against COVID-19,” the hospital said as it advised employees to take extra precautions.

This brought the total for the country to 1,597,689 since the pandemic struck in March last year.

The DOH reported 127 more deaths from COVID-19, including 75 people who were previously tagged as recoveries, or the fourth consecutive day of more than 100 reported deaths. The death toll is now at 28,016.

Meanwhile, 4,069 more patients were declared as recovered based on the two-week quarantine protocol, for a total 1,506,027 recoveries.

The DOH said 63,646 people still infected with the virus were either isolated or hospitalized, including nine people who were previously tagged as recoveries.

The results did not include those from four laboratories that failed to submit their data.