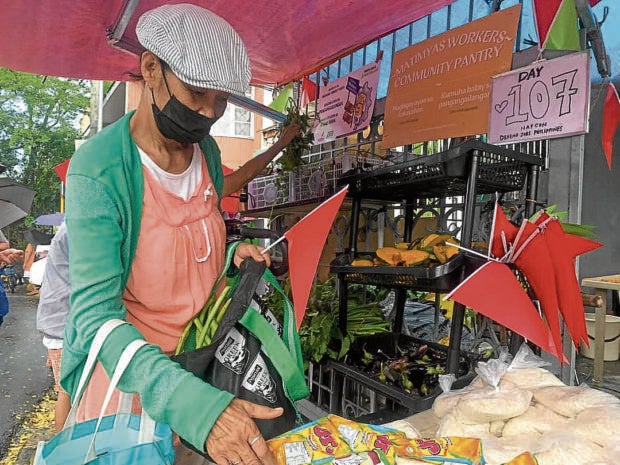 COLOR-CODED DISTRIBUTION Volunteers of Defend Jobs Philippines (DJP) will fan out across Sampaloc, Manila, to pick up food items from homes with green flags and deliver them to homes with red flags on Aug. 6 when Metro Manila comes under hard lockdown. —PHOTO COURTESY OF DJP

MANILA, Philippines — With stricter quarantine restrictions looming or already reinstated in many parts of the country to curb an increase in COVID-19 cases, community organizers have begun thinking of new and creative ways to get help where it is needed.

One initiative asks families in Sampaloc, Manila, to display a piece of red or green cloth or flag outside their houses. Red means they need food while green indicates they have items to donate.

Volunteers assigned to go around the area will then distribute food to the “red” households and collect donations from their “green” counterparts.

The Flag Brigade PH campaign, as the initiative is called, will be launched by labor group Defend Jobs Philippines on Aug. 6, when heightened quarantine measures are again implemented in Metro Manila and other provinces where COVID-19 cases have gone up in recent weeks.

The group is targeting some 200 households in Sampaloc, with a plan to widen the area of coverage in case the lockdown stretches beyond two weeks.

Flag Brigade PH was inspired by the White Flag movement in Malaysia, where poor households would display “benderaputi” (white flags) in front of their homes to signal distress.

Because most people would be prohibited from going outside their homes between Aug. 6 and Aug. 20 when Metro Manila goes under enhanced community quarantine (ECQ), Defend Jobs Philippines decided to make the pantries “mobile,” according to its spokesperson Christian Lloyd Magsoy.

In a Facebook post on Friday, Non said that with another lockdown looming, “it was time for the national and local governments, and big corporations to step up.” She organized the first community pantry on Maginhawa Street in Quezon City in April when Metro Manila and four nearby provinces were placed in a “bubble” to contain a hike in infections.

The initiative, which provided free food and other goods to people in need while encouraging those with means to donate what they could, was quickly replicated in many parts of the country.

According to Magsoy, the government seemed “unprepared” for the new round of lockdowns, as it also admitted earlier that it was still scrambling to find funding for “ayuda,” or financial aid for households under ECQ.

“Community pantries must not stop during the reimplementation of the ECQ as our poor countrymen will be most needing these services especially during the hard lockdowns,” Magsoy said.

“We will still rely on each other’s support through any form of community pantries and the like,” he added.