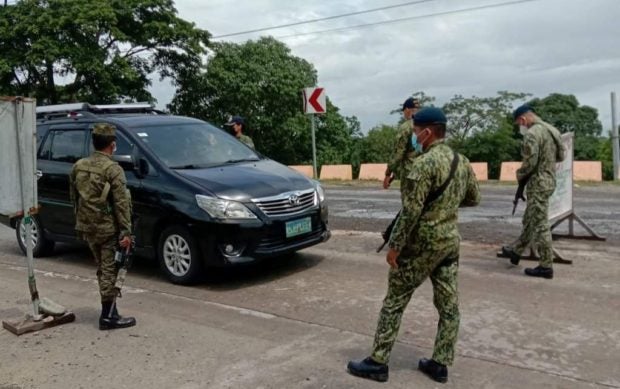 The provincial government of Eastern Samar even went as far as barring unvaccinated persons from entering the capitol building in the capital Borongan City starting on Aug. 2.

Gov. Ben Evardone explained the measure was intended to avoid having any of their employees getting infected with the Delta variant and to encourage his constituents to have themselves inoculated.

There was no Delta variant case in the province but Evardone, on Friday, said: “We need to guarantee the safety of our employees and to ascertain that our offices will remain operational to serve the public.”

Only those who have been partially or fully vaccinated would be allowed inside the building. “Individuals who fail to present a vaccine card shall be denied entry to the capitol,” Evardone said.

A number of residents were not happy with the policy and went on social media to criticize the order. They asked how they could they comply with the order if vaccine supplies in the province were not enough to inoculate all its people.

In Lapu-Lapu City in Cebu, Mayor Junard “Ahong” Chan has also declared a similar policy, prohibiting unvaccinated persons from entering shopping malls, convenience and grocery stores, and public markets in the city starting on Aug. 25. The policy was also met with strong opposition from Chan’s constituents.

Lapu-Lapu has recorded 19 Delta variant cases as of Friday, which accounted for most of the 32 cases of the variant reported in Cebu.

In Cebu City, which is under modified enhanced community quarantine (MECQ) until Aug. 15, the first day under the second strictest quarantine classification on Sunday saw at least 194 individuals, 22 of them minors, apprehended for violating the 10 p.m. to 5 a.m. curfew. A first offender faced a fine of P500.

On Sunday, the national pandemic task force granted the appeal of Cebu officials to put the province under general community quarantine (GCQ) instead of MECQ. But the cities of Cebu, Mandaue and Lapu-Lapu will remain under MECQ.

In Ilocos region, Ilocos Norte province reverted to hard lockdown as it battled its worst COVID-19 spikes, which had put pressure on hospitals scrambling to increase their COVID-19 bed capacities and shortage in manpower.

The capital Laoag City was placed on enhanced community quarantine from Aug. 1 to Aug. 15 by Gov. Matthew Marcos Manotoc, citing a spike of cases in the city, which remained to be an epicenter of COVID-19 cases in the province, accounting for 32 percent of its 3,170 active cases.

On Friday, independent research group OCTA flagged the city anew for having a critical infection rate at 1.49 and a critical average attack rate of 54.51 cases per 100,000 population in the city.

The group also noted that the utilization rate for hospital intensive care units in Ilocos Norte was at a critical risk of 91 percent.

In Central Luzon, Nueva Ecija was among the first provinces in the region to reimpose strict border control starting on Sunday even as it remained under the loosest classification of modified general community quarantine.

The reactivated border checkpoints would help slow down the spread of COVID-19 variants in the province amid the recent spikes of cases in Metro Manila and its nearby provinces, said Gov. Aurelio Umali in an order issued on Sunday.

Umali assured there would be “no barricades of any type” at the Nueva Ecija borders but those entering the province “for whatever purpose” must present a negative swab or antigen test result taken within the last 72 hours from entry.

The province set up its border checkpoints in Zaragoza, its boundary town to Tarlac province, which has 457 active cases as of July 30, mostly in the capital Tarlac City.

Pampanga province, the highly urbanized Angeles City, and the adjacent Mabalacat and San Fernando cities were also battling a spike in infections, which collectively had 1,054 active cases as of July 30.