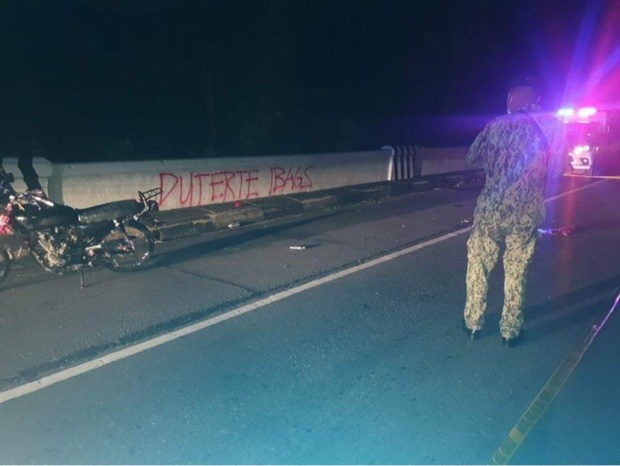 MANILA, Philippines — Sen. Leila de Lima on Saturday called for an “urgent and impartial” investigation of the killing of two activists in Albay, just hours before President Duterte delivered his State of the Nation Address (Sona) and ordered the Philippine National Police to kill communists.

De Lima bewailed how police officers gunned down two activists as they were spray-painting a bridge railing with the words “Duterte Ibags—” in Guinobatan town in Albay on July 26.

“They were spray-painting ‘Duterte Ibagsak’ when they were gunned down. The image of the unfinished slogan on the wall and their blood on the concrete will hit you to the core,” she said.

In his Sona on Monday, Mr. Duterte reiterated his shoot-to-kill order against communist rebels, partly blaming the alleged connivance of military and police personnel in supposedly supplying rebels with firearms and ammunition for the unending insurgency problem in the country.

“Many soldiers died because of the arms they brought into the Philippines. So my orders to you, if you see them walking around, kindly shoot them dead. I would be happy,” he said.

The two activists, Jemar Palero and Marlon Naperi, were killed in what police said was a shootout, while spray-painting graffiti on Banao Bridge in Guinobatan town.

De Lima expressed alarm that authorities were again using the “oft-repeated ‘nanlaban’ alibi” to defend the killings of Palero and Naperi, members of the Organisasyon ng mga Magsasaka sa Albay and Albay People’s Organization, respectively.Human rights group Defend Bicol said the two victims were reportedly writing a protest slogan on Banao Bridge as part of their “Operation Pinta,” when cops allegedly “rained bullets on them.”

“I have long been sounding the alarm over the series of killings in the recent months, especially in Bicol, but this latest incident struck me hardest,” she said.

The activists were only able to write “Duterte Ibags” instead of “Duterte Ibagsak” before they were killed by police who claimed that the two men fired shots at the roving police patrol, forcing cops to fight back—a narrative, which the rights group Karapatan refuted, De Lima said.

A former justice secretary and Commission on Human Rights chair, De Lima said a serious investigation of the incident was necessary to ensure justice for the victims and their families.

The senator expressed disbelief how Mr. Duterte supposedly professed his love for Bicolanos in his Sona, when hours before, two Bicolanos expressing discontent were gunned down.